THE FEJEE MERMAID: A HIDEOUS SIGHT... 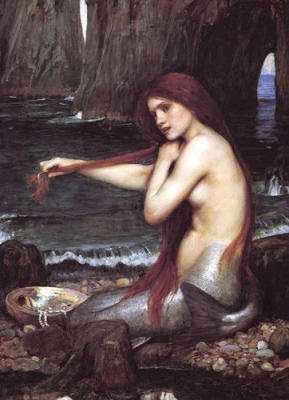 When I was a little girl, I was obsessed with mermaids. Hans Christian Anderson had a lot to answer for, as did John William Waterhouse who painted this romantic and sensual image.

But imagine how thrilled I would have been if I'd lived in New York in 1842 and chanced to see this advertisement for PT Barnum's American Museum - telling of its acquisition of some exotic Peruvian Mummies, a duck-billed platypus and, last but not least an object hailed as the Wondrous Fejee Mermaid... 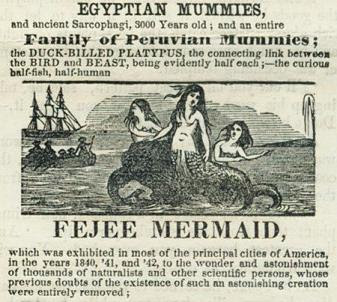 Many children must have been horrified to witness the actual display: for Mr Barnum's glorious mermaid was nothing more fantastical than the mummified torso and head of a monkey sewn onto the tail of some great fish, the grotesque sight of which may well have caused many a sensitive Victorian soul to succumb to a fit of the vapours.

Nevertheless, the mermaid proved a most successful lure, until the museum and everything in it burned down in 1865, after which (despite imitations being displayed in freak shows around the world) the original Mermaid was thought to be lost, as were thousands of other exhibits ~ including a fragment of The True Cross which had been artfully displayed next to that other sacred object: the bed of one Robbie Burns!

Click onto this link to learn more about Barnum's American Museum.