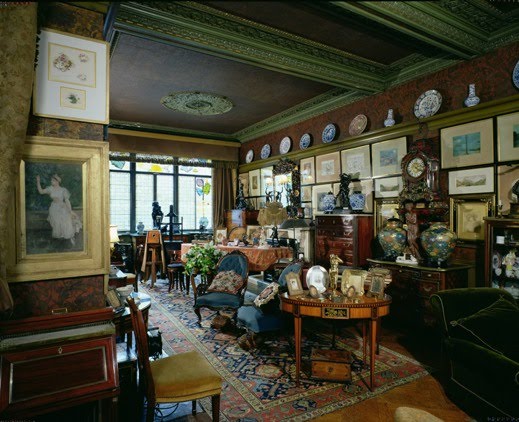 Should you ever wish to enter a virtual Victorian home, then you need go no further than Number 18, Stafford Terrace, London, W8. The original owner, Mr Edward Linley Sambourne was the eccentric and rather racy Punch cartoonist and photographer who married Marion, the daughter of a wealthy stockbroker. In 1874, with her father's help, they paid £2,000 to secure an eighty-nine year lease on a house in the classical Italianite style. And, there they remained for 36 years, living in a dark, cluttered opulance made up of Chinese ceramics, Turkey rugs, ornate brass beds, Morris wallpapers and stained glass windows - not to mention all the letters, diaries and bills that provide a fascinating insight into the day-to-day running of such a house. 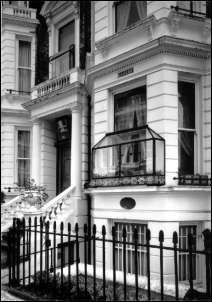 Subsequent generations hardly lived in the house at all, using it for entertaining actresses, a pied a terre and party venue. And, at one such party on Guy Fawks night in 1957, Linley's granddaughter Anne was to propose founding the Victorian Society to preserve the house as a 'living museum'. 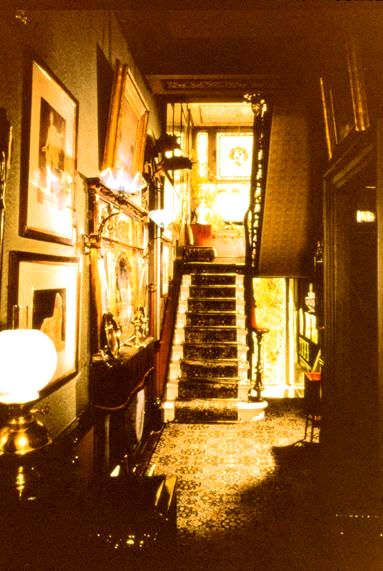 If you decide to visit in person, you can make the choice between a conventional viewing or one where costumed guides dress up as members of the family and staff. All details are to be found here.
http://www.rbkc.gov.uk/subsites/museums/18staffordterrace.aspx
Posted by Essie Fox at Saturday, November 07, 2009