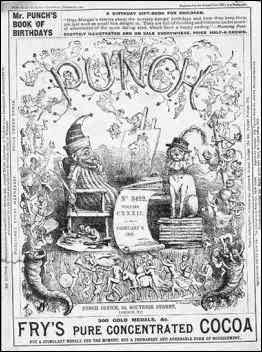 Edward Linley Sambourne first began his working life as an apprentice draughtsman in a marine engineering works in Greenwich. His artistic career was to blossom when his cartoons came to the attention of the editor of the satirical magazine, Punch ~ for which the cover shown above is a fine example of his style.

However, his talents did not end with illustration work. He also developed a passion for photography, growing rapidly as an art form in the second half of the nineteenth century. Very soon, one of the attic rooms in his home in Stafford Terrace was converted into a studio. A bathroom became his dark room, the walls of which were covered with many examples of his work ~ with images of his family, and also of the household staff who he asked to pose as models.

Below, you can see his coachman dressed as the Emperor Nero while plucking away on a fire screen lyre ~ a pose that later on became the basis of a political cartoon... 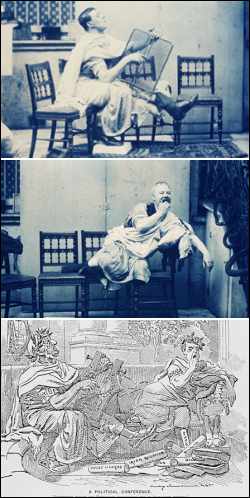 When he was commissioned to illustrate Charles Kingsley's story, The Water Babies, Linley Sambourne used his daughter Maude to pose for the character, Ellie. His son, Roy, became the model for Tom, Charles Kingsley's child chimney sweep. 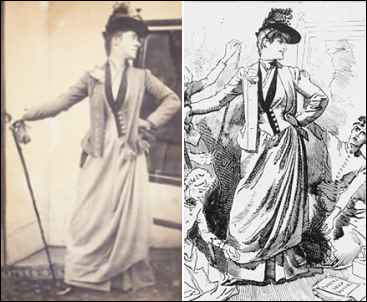 Now and then Sambourne's wife, Marion, was also persuaded to model, though she was said to be more concerned with the running of her household than playing at such frivolities. And then there were occasions when she took the children off from home for seaside trips and holidays ~ when her husband was far 'too busy with work' to think of leaving London ~ when he used his freedom in the house to acquire professional models. 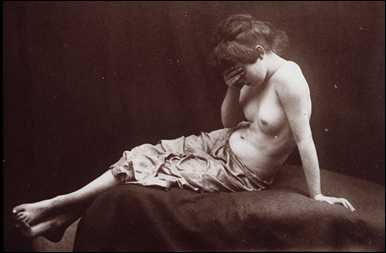 For his portraits of naked females, Sambourne was always careful to use the plainest, non-descript backdrops and to hide his models' identities ~ many of whom he lured away from the local Kensington Camera Club. But, in one somewhat provocative pose a girl is clearly sitting in Marion's favourite armchair, her face masked and, somewhat ironically, holding a puppet of Mr Punch.


Whether or not Marion ever saw that particular photograph, she was most certainly aware of her husband's racey activities, very often referring to 'Lil's secrets' when writing in her diaries.

THE VV AS A MAID IN THAT MR LINLEY SAMBOURNE'S HOUSE