THE DIARY OF A MURDER BY LEE JACKSON

The Diary of a Murder is the latest Victorian crime novel by the acclaimed author Lee Jackson (see left). Unlike Lee's six previous novels, this story has been published online as an e-book. You can read it by clicking onto this link, and what's more it is absolutely free though if you enjoy it - and the VV is sure that you will - you can, at your own discretion, make a donation via Paypal. Alternatively, and for a nominal fee, Lee will supply an electronic version suitable to be read on Kindles etc. And, if you would still prefer a paper copy, Lee may be producing a small 'on demand' print run. Please see his website for details.

Lee's first novel, London Dust (published in 2003) was nominated for the CWA Ellis Peters Historical Dagger Award. At fantasticfiction the novel is described as 'a powerful evocation of the underbelly of Victorian London, full of flavour, completely convincing and utterly gripping.' 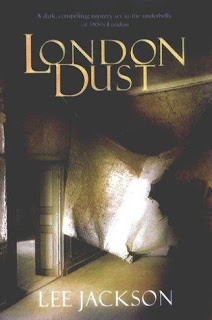 Much the same can be said for The Diary of a Murder. It certainly hooked the VV, keeping her reading well into the night.

Lee Jackson's own summary is as follows -

Jacob Jones is a respectable clerk at the Crystal Palace Company, with a pretty young bride and a delightful new home in Islington. When his wife is murdered, everything points to his guilt, even a handwritten confession.


But the police discover Jacob Jones's diary, which tells a different story. They learn of a husband trying to bury his sordid past; a wife afflicted by a deep personal tragedy; an unlikely love affair that leads to a fatal conclusion.


Is Jones' diary a confession? An attempt to exonerate himself? A study in madness? Read the police investigation — read the diary itself — and uncover the truth.

The VV is restraining herself from giving a more thorough review - simply because to do so would detract from the mystery that Lee Jackson has woven so skilfully. She will say that Jacob is a complex character - a lowly paid clerk with literary aspirations, and a man who, despite his own pious pretensions, finds the restraints of married life to be increasingly irritating.

A house in Claremont Square, Islington - one of the settings in The Diary of a Murder

There is some wonderful scene setting. The author conveys the nation's shock at the sudden death of Prince Albert. We follow Jacob through bustling streets where shops sell all manner of Christmas gifts. When the family sit around to tell ghost stories, we hear Jacob scoff at the ridiculous notion of a story about a haunted train - a clever and knowing 'Dickensian' touch. We see the newly-built houses on the streets and squares of Islington, as well as a darker, claustrophobic world inhabited by the drunken and prostitutes.

But then, Lee Jackson knows a great deal about Victorian London having compiled his own vast compendium, The Victorian Dictionary. If you haven't already discovered this site, the VV strongly recommends a visit - and for those who prefer to read a hard copy, the dictionary is available in book form - and if that's not enough to whet your appetite, you can also follow Lee's blog which is, rather charmingly, called The Cat's Meat Shop.

And finally, if you do read the book, Lee Jackson welcomes any feedback. Again, you can contact him via his website - or you can leave a comment here.


P.S. This post has been linked to Nicola Morgan's blog which is one year old today. Congratulations to Nicola/ the Crabbit Old Bat who is generous, forthright and helpful in her posts about the world of writing and publication. If you are an aspiring author, whatever the genre or period you've chosen, the VV recommends Nicola's words of common sense advice.