THE TRIAL OF THE CENTURY... 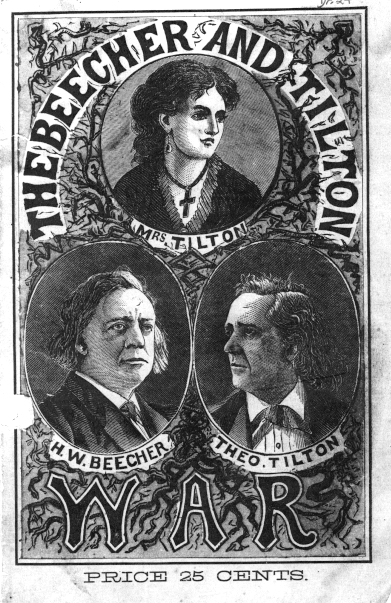 Beginning in 1875 and continuing for over six days, the American nation became obsessed with what the newspaper headlines hailed as The Trial of the Century: Tilton versus Beecher.

It was a 'cause celebre' that ate up more press column inches than the entire Civil War. The courtroom was described as Bedlam, with hundreds arrested for rowdy behaviour and tickets sold on the black market fetching as much as five dollars a head. Every day, thousands were turned away and the rich were happy to crush in with the poor, for this was the most popular theatre in town, with shouting, clapping, hissing and booing - a regular pantomine!

Outside, reporters were armed with spyglasses, climbing up lamp posts to get a view. The courthouse lawns were drowned in tents and a great many pockets were lined with gold as hotels and bars and protitutes saw to the various appetites of those who had travelled great distances to hear the scandalous evidence. 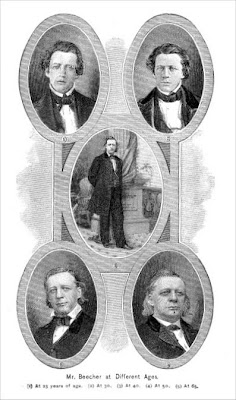 The charges were of adultery between the influential Henry Ward Beecher, then leader of the Plymouth Brethren Church, and a member of his congregation -  the pretty, dark haired Elizabeth 'Lib' Tilton.

Lib was married to Theodore, the tall and golden-haired editor of the New York Independent. The Tiltons were great friends with Beecher and both devout members of his flock, with the clergyman's sermons a regular feature in Theodore's popular newspaper.


But,Tilton was often away  from home. Increasingly interested in Spiritualism, he gave lecture tours during which he proclaimed his beliefs in Free Love, going so far as to insist that 'marriage without love is a sin against God.'

During the build up to the election of 1872 he voiced his support for equal rights, becoming a hero of the Woman's Movement - and an advocate of their great hope, a certain Victoria Woodhull.

Victoria became his lover. The couple were seen rowing in Central Park, even swimming naked in the sea when they visited Coney Island. Tilton's infatuation was intense and he publicly wrote of his mistress: "Her sincerity, truthfulness, nobility and uprightness of character rank her in my mind, as a pious Catholic would rank Theresa...to see her is to respect her - to know her is to vindicate her...a heroine of history."

The people were not so convinced. In the streets a song was often heard, "Theodore Woodhull for President, Victoria Tilton for Vice." 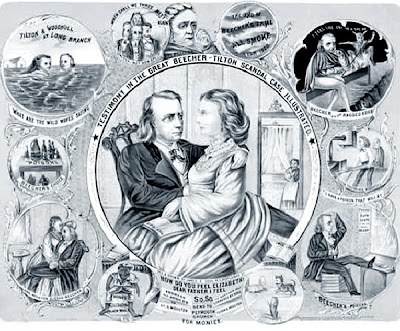 Meanwhile, lonely and humiliated, Lib was consoled by Henry Ward Beecher, a much older and heavily featured man who possessed a confident, self-righteous charm. He was said to be a sensualist, with a passion for carrying jewels in his pockets, caressing them when he felt in low spirits and calling them his opiates.

He also caressed many mistresses - all hand picked form his church congregation.

His affair with Lib became publicly known when exposed by Victoria Woodhull, who wrote of it in her newspaper, Woodhull and Claflin's Weekly. Victoria was dangerous when scorned, and Beecher had badly let her down when withdrawing the promise of support for her presidential bid - and then somewhat hypocritically denouncing her belief in Free Love.

In return, Beecher accused her of libel, seeing Victoria arrested and then charged with the offence of  'sending obscene material through the mail'.  But, Victoria knew even more secrets; such as the fact that Lib Tilton had been pregnant with Beecher's child - the child that she then lost when her lover insisted she have an abortion in the seventh month of pregnancy. Lib had almost died. And, to add insult to injury, when Beecher visited her sick bed he asked her to sign a document absolving his name from any crime. 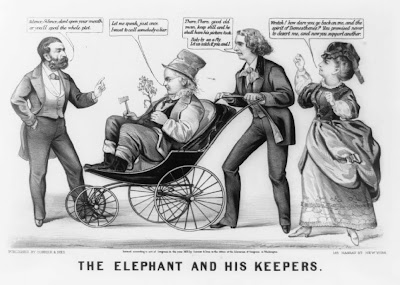 Lib was the true victim in all of this. Tilton, while having his own affairs, and away at the time when Lib conceived, had simply refused to contemplate raising a bastard in his house. He threatened to throw his wife onto the streets while withdrawing all access to their own living children. And, knowing she had no legal rights Lib ended up with little choice but to go ahead with the termination -even though she was already grieving from the loss of a son with Tilton, when the little boy died from cholera.


During the adultery trial, Beecher was only concerned with saving his own reputation. Lib, unable to testify because her husband was the plaintiff, meant that her own defence was constricted by the interspousal immunity rule. She could only listen while Beecher damned her name, claiming that she was broken in body and mind  - that his entire congregation viewed her as a woman prone to delusion and infatuations. Even when Lib's Irish maid then stood as witness and said that she had seen Beecher kissing her mistress, the testimony was dismissed with Beecher's lawyers insisting that the word of the Irish could never be trusted for they were known as a fanciful race - and, what's more, they were almost always drunk!

Lib Tilton attended court every day, sitting in silent dignity while becoming increasingly thin and pale. At the end of the trial she asked the judge if he might allow her that one chance to address the jury. Speaking in a low and trembling voice, she said the whole wretched affair was a sham, that her preacher had never made love to her, and what she'd confessed to her husband had been no more than a figment of her imagination. A wicked and deceitful lie.

Was that the price exhorted by Beecher for keeping his silence over the fate of Lib's aborted child?


As far as the outcome of the trial was concerned, the jury reached a 'no verdict'. But that proved little comfort for Lib who from that day on became a recluse, living alone in a darkened room, a prematurely aged exhibit in her own museum of shame and loss. She died while still relatively young, having lost her health and sight.

Theodore Tilton was destroyed, forced to leave his profession and home in New York to seek out a new life in France. He did not follow Victoria to London even though his very own words had had hinted of her future destiny -

"She can ride a horse like an Indian, and climb a tree like an athlete; she can swim, row a boat, play billiards and dance. Moreover, as the crown of her physical virtues, she can walk all day like an Englishwoman."

While Victoria married her English millionaire and lived to a ripe old age in style Tilton died a pauper in a Paris attic; alone as his wretched wife had been. None of his children attended his funeral or attempted to have his body brought back home to America. 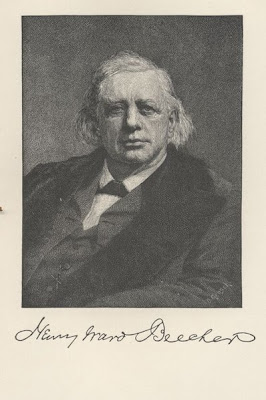 As for Henry Ward Beecher, he acted like the victor, as if he'd been fully exonerated, striding out of the court through cheering crowds to lead a procession back to his church. There he walked up the aisle, shaking hands, and kissing cheeks, and crying out triumphantly: "My friends, we have won!"

So, perhaps the old New York saying was true: "Mankind is devisible into three classes - the good, the bad, and the Beechers!"

He certainly was something else.