THE STORY OF JUMBO THE ELEPHANT... 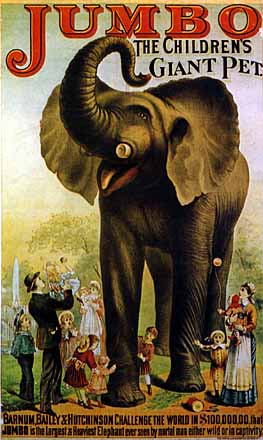 Jumbo the elephant 1861-1885
Jumbo was an African elephant. His name was taken from ‘Jumbe’, the Swahili word for ‘Chief’. He eventually grew to be more than thirteen feet in height and to weigh at least six tons, achieving such notoriety that his name is now synonymous with anything of enormous size. 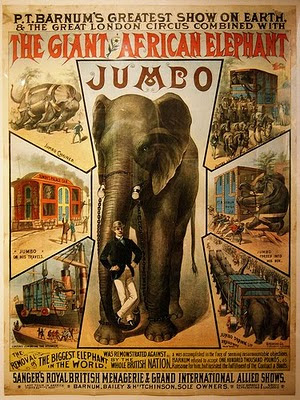 Jumbo was born in the French Sudan before being imported to the Parisian Zoo, the Jardin des Plantes and, from there, while still only four years old, he was transferred to London Zoo where he became the star attraction and remained until 1882 when – having become somewhat cantankerous and difficult for his keepers to control – he was purchased for $10,000 by the American, P.T. Barnum, becoming an act in the famous circus, “The Greatest Show on Earth.” 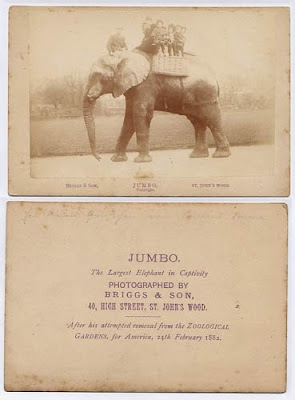 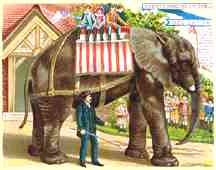 Jumbo’s sale was not made without a great deal of objection, particularly from children who had visited London Zoo and ridden upon the great beast’s back. Queen Victoria received more than 100,000 letters appealing for her to intervene. But, all in vain.  Jumbo was sold, and was probably less bored and much happier for his temper was said to be greatly improved when touring through America and Canada in a specially constructed railway carriage. 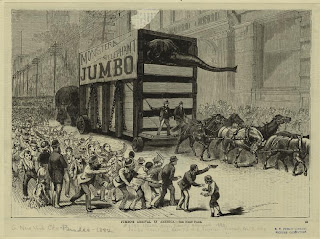 Jumbo's arrival in America
Sadly, within three years ‘The Children’s Friend’ was dead, his fate met on an Ontario railway line when – or so Mr. Barnum said – he had been trying to save Tom Thumb, another  much younger elephant  in danger of being hit by an unscheduled express locomotive. Tom Thumb was scooped up in the cow catcher and flung from the tracks, but Jumbo was trapped when the train derailed and was crushed by the flying wreckage. Sustaining terrible injuries, the elephant was dragged to the sidings and comforted there by his handler until he finally died. 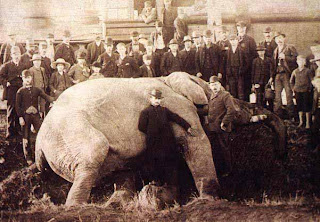 The Tragic Scene of Jumbo's death
But, Jumbo’s fame lived on. His skeleton was donated to the Museum of Natural History in New York. His heart was sold to Cornell University, and his hide was then stuffed, continuing to travel with The Greatest Show until, in 1889, Barnum donated him to Tufts University where he became the official mascot and was displayed until destroyed by a fire in 1975.
The VV has recently read and very much enjoyed The Elephant Keeper, a novel by Christopher Nicholson which tells the remarkable story of  two elephants imported to England at the end of the eighteenth century. Originally kept in a stately home, their lives and subsequent fates are tenderly chronicled by Tom, the boy who becomes their keeper. Tom's relationship with Jenny, the female elephant, is very movingly told, but there are themes that make this a story more suitable for the mature reader than a child. Even so, it is delightful, informative, disturbing, and, at times, quite heartbreaking.
The Elephant Keeper: A Novel

Email ThisBlogThis!Share to TwitterShare to FacebookShare to Pinterest
Labels: JUMBO THE ELEPHANT. THE ELEPHANT KEEPER BY CHRISTOPHER NICHOLSON. P.T. BARNUM. THE GREATEST SHOW ON EARTH