TEE-TOTALLERS AND THE TEMPERANCE SOCIETY... 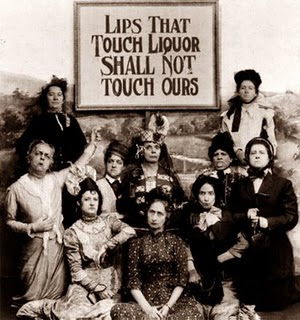 Having a Tee-totaller around the house, as the VV does from time to time, can lead to a sense of moral inadequacy, when a lack of control and rectitude by those of us who do indulge leads to being fixed in the pious stare of HE who remains cold stone sober.

Joseph Livesey - who doesn't look like fun!
But where does that saying – Tee-total – come from? The VV had always assumed that it must have had something to do with drinking vast quantities of tea, in preference to inebriating beverages. But that does not appear to be the case. The term originated around 1832 at a meeting of the Preston Temperance Society, whose leader, Joseph Livesey, was the author of the Temperance Pledge:
“We agree to abstain from all liquors of an intoxication quality whether ale, porter, wine or ardent spirits, except as medicine.”
So, complete and total restraint – and one explanation for the term Tee-total is said to have come about when a stammering Livesey follower said that nothing would do but “tee-tee-total abstinence.”
Others came to think that the ‘Tee’ is simply a way of accentuating the T in Total; a way of stressing the meaning yet more. And, there is also the idea that it stood for the T in Temperance – the letter written after the signature of any who swore to uphold the pledge – although when the movement reached Australia in the mid 1830’s, its followers preferred to advocate moderation, rather than absolute abstinence. 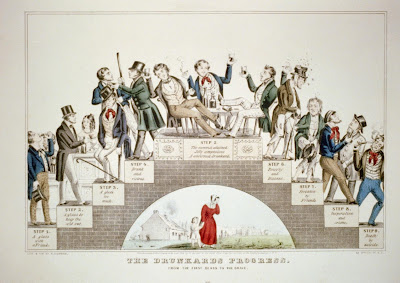 And, in later years, the Quakers and Salvation Army would also march under the Temperance banner and lobby parliament for restrictions on the sale of alcohol, seeing in their charitable work on the streets the terrible harm that addiction caused. 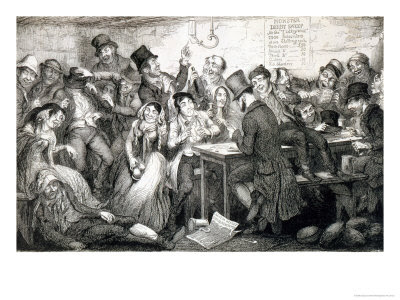 The Boy Gambles His Money - Plate 2 of Cruikshank's The Drunkard's Children
The artist, George Cruikshank who had watched his own father die of alcoholism was an ardent follower of Temperance, producing several books on the subject in an attempt at education. These included titles such as ‘The Bottle’ (1847), ‘The Drunkard’s Children (1848), and The Worship of Bacchus (1862). 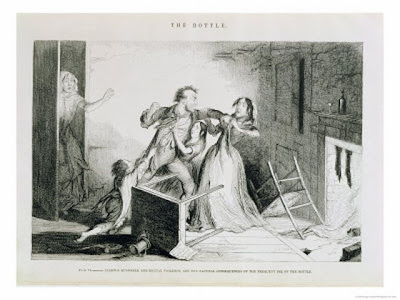 From Cruikshank's The Bottle
Religious believers played a great part in the Temperance Movement. The Catholic priest, Theobald Matthew, managed to persuade thousands of people to sign the Pledge in Ireland. The Non-Conformist Movement was against the use of alcohol and, in 1886, of 1,900 Baptist ministers 1,000 claimed to be total abstainers. 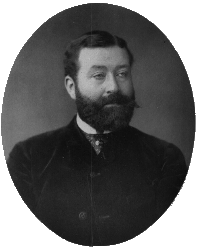 George Sims - who looks a little sozzled!
In 1889, George Sims wrote ‘How the Poor Live’ and explained his own reasons for abstinence:
Drink is the curse of these communities; but how is it to be wondered at? The gin-palaces flourish in the slums, and fortunes are made out of men and women who seldom know where tomorrow's meal is coming from.

Can you wonder that the gaudy gin-palaces, with their light and their glitter, are crowded? Drink is sustenance to those people; drink gives them the Dutch courage necessary to go on living; drink dulls their senses and reduces them to the level of the brutes they must be to live in such places.

The gin-palace is heaven to them compared to the hell of their pestilent homes. A copper or two, often obtained by pawning the last rag that covers the shivering children on the bare floor at home, will buy enough alcohol to send a woman so besotted that the wretchedness, the anguish, the degradation that await her there have lost their grip. The drink dulls every sense of shame, takes the sharp edge from sorrow, and leaves the drinker for awhile in a fools' paradise.

It is not only crime and vice and disorder flourish luxuriantly in these colonies, through the dirt and discomfort bred of intemperance of the inhabitants, but the effect upon the children is terrible. The offspring of drunken fathers and mothers inherit not only a tendency to vice, but they come into the world physically and mentally unfit to conquer in life's battle. The wretched, stunted, misshapen child-object one comes upon in these localities is the most painful part of our explorers' experience. The country asylums are crowded with pauper idiots and lunatics, who owe their wretched condition of the sin of the parents, and the rates are heavily burdened with the maintenance of the idiot offspring of drunkenness.
And let that be a warning to us all! 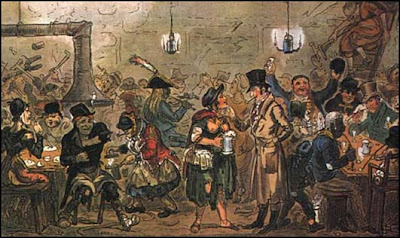 As a final note, the VV would like to share her non-alcoholic version of the lovely summer cocktail ‘Pimms’ – basically chop up your cucumber, strawberries, apples, lemons, oranges and mint etc, and then place it in some iced lemonade, BUT rather than adding Pimms to the brew, simply infuse a few drops of good Balsamic vinegar. It really is an excellent substitute though, as many will ask, I’m sure – what on earth is the point of that? 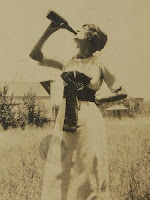