THE TRAGIC TALE OF THE ELEPHANT MAN... 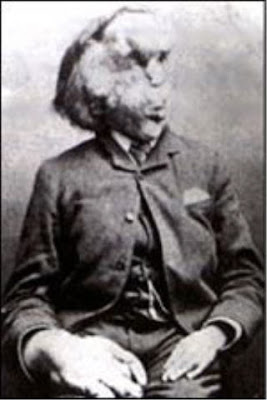 Joseph Merrick 1862-1890
Joseph Merrick, otherwise known as The Elephant Man, was the physically deformed but intelligent and charming young Victorian who became one of the most famous ‘acts’ in the nineteenth century world of freak shows.

Such a public fate was destined to be when the young boy was thrown onto the streets following the death of his mother. His father went on to remarry, but the newlyweds wanted nothing to do with such an ugly sickly child who had already begun to show signs of the congenital deformity that led to his lips and limbs being swollen, with thick darkened lumps appearing on his skin, and an extending bony mass which began to grow out of his forehead. 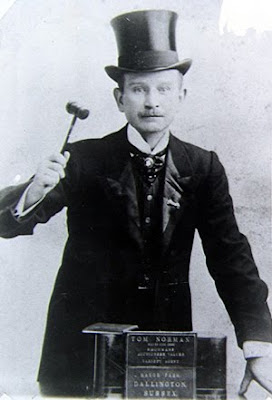 Tom Norman - The Silver King
Having left school at the age of twelve, Joseph entered the workhouse at seventeen and was sent out to sell boot polish on the streets, though such an unprotected profession left him vulnerable to taunts and cruelty, and during that time he also became lame as the result of a serious fall. But, undaunted by his ailments, at the age of twenty-one – whether of his own volition or on the advice of some fellow inmates or workhouse staff – Joseph wrote to the music hall comedian Sam Torr while he was performing in Leicester and suggested that he might join Torr's show as a freak show exhibit. Torr put him in touch with Tom Norman, the UK’s answer to PT Barnum who was also known as The Silver King, due to his flashy silver jewellery. 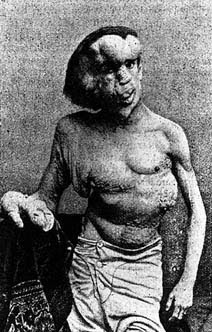 Joseph had been originally set up as a permanent exhibit in a shop on the Whitechapel Road in East London - a location directly opposite the London Hospital. When one of the surgeons, Frederick Treves,  happened to make a visit there, he invited Joseph to be examined and photographed for his medical records. Treves described his patient as being ‘deformed in body, face, head and limbs. His skin, thick and pendulous hung in folds, and resembled the hide of an elephant – hence his show name.'

But the shows were to come to an end when the exhibition of freaks was criminalised and, with the Whitechapel shop being closed up by the police, Joseph was persuaded to go on a tour of Europe instead. However, while in Brussels he was robbed and abandoned by his road manager and only with a great deal of difficulty – being penniless and hardly able to speak – did he manage to make his way back to London and, by the means of a written note, present himself once again to Treves at the London Hospital – though some say that Treves (left) found him while visiting Liverpool Street Station.


What is agreed is that Joseph was almost at death’s door, sick with bronchitis and malnutrition, and although Treves knew his patient’s condition was incurable he offered Joseph a permanent home in some basement rooms at the hospital. There the two men were to meet every day, developing a  close friendship, discussing the poetry and prose that Joseph often wrote, of which the following is an example -

Tis true my form is something odd,
But blaming me is blaming God;
Could I create myself anew
I would not fail in pleasing you.
I I could reach from pole to pole
Or grasp the ocean with a span,
I would be measure by the soul;
The mind’s the standard of the man.


Ironically, even in hospital, Joseph remained an exhibit of sorts, receiving gifts and visits from members of the London gentry, including Alexandra, the Princess of Wales.  But, despite making his own trips to the theatre and countryside, he grew more lonely, morose and depressed, and he died at the age of twenty-seven, having suffered asphyxiation as the result of a crushed trachea after sleeping by lying down on his back, rather than in the usual sitting position that supported the enormous weight of his head. There was much debate as to whether he had been murdered or actually committed suicide, perhaps fearing for his future on hearing rumours that he might have been sent away from the hospital where he had become a financial drain.
In a later pamphlet Treves was to write that his friend - had been plunged into the Slough of Despond, but with manly steps he gained the farther shore. He had been made "a spectacle to all men" in the heartless streets of Vanity Fair. He had been ill-treated and reviled and bespattered with the mud of Disdain. He had escaped the clutches of the Giant Despair, and at last had reached the "Place of Deliverance," where "his burden loosed from off his back, so that he saw it no more."

View of the Joseph Merrick from the rear


The Elephant Man’s skeleton was preserved and is still held at the London Hospital, but even today with advanced DNA tests his condition has not been conclusively proved. It is thought most probably that he suffered from neurofibromatosis type 1, combined with Proteus syndrome. 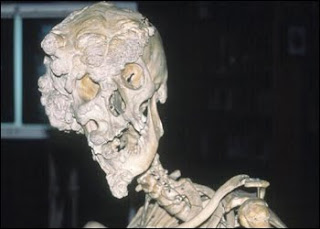 In 1980 David Lynch’s film The Elephant Man was released. Based on The Elephant Man and other Reminiscences, a book by Sir Frederick Treves, it received 8 Academy award nominations and won the accolade of being the Best Picture 1981. Shot in black and white, it boasts a wonderful cast including John Hurt as Joseph Merrick and Anthony Hopkins as Treves. There are also fine performances by Anne Bancroft, John Geilgud, Hannah Gordon, Wendy Hiller, Michael Elphick and Freddie Jones. 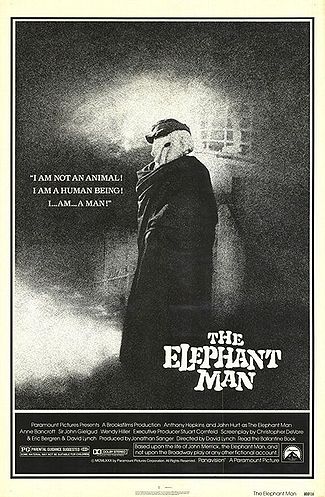