CHANG AND ENG, THE SIAMESE TWINS... 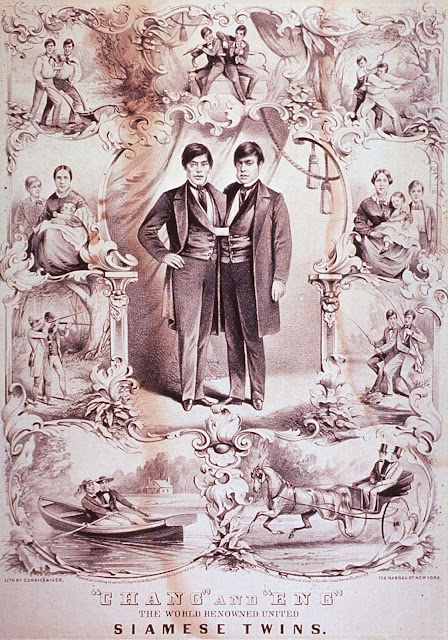 The term Siamese Twins was popularised by Chang and Eng, the co-joined identical brothers who were born in Siam (now known as Thailand) on May 11, 1811.

The twins were connected at the chest by a thick band of skin and, although their livers were linked, in this day and age they could have been successfully surgically separated.  At that time, their mother refused any attempt to do so, fearing that one of her sons might die. Instead, she helped to gradually stretch the band of flesh that bound the boys together until they were able to stand side by side, rather than being face to face. 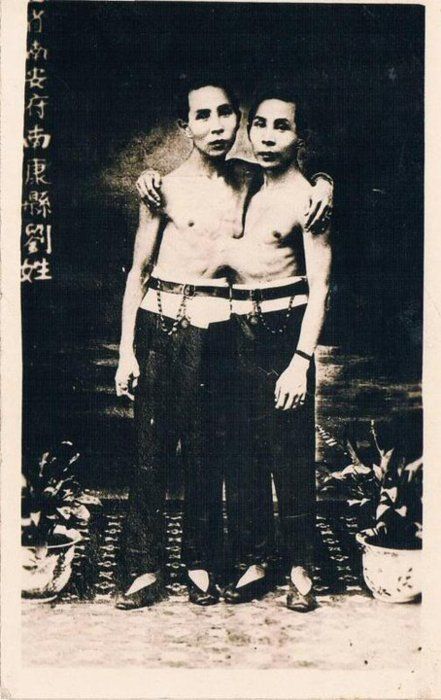 Ironically, growing up in Siam, the boys were known as The Chinese Twins – owing to their father being Chinese, and their mother half-Chinese, half Malay. Also, when they were first born, they were viewed as a bad omen. Some even said they hailed the coming of the end of the world; instead of which their growing fame brought prosperity to their village.
In 1828, the twins were discovered by an English trader called Robert Hunter who, along with his accomplice, the wonderfully named Captain Abel Coffin, took the boys on a tour of America, and also around Europe – except for France which denied them admission. They proved to be very successful, even meeting up with royalty. However, in 1832, they disposed of their managers’ services and set up in business with the American showman, P T Barnum. 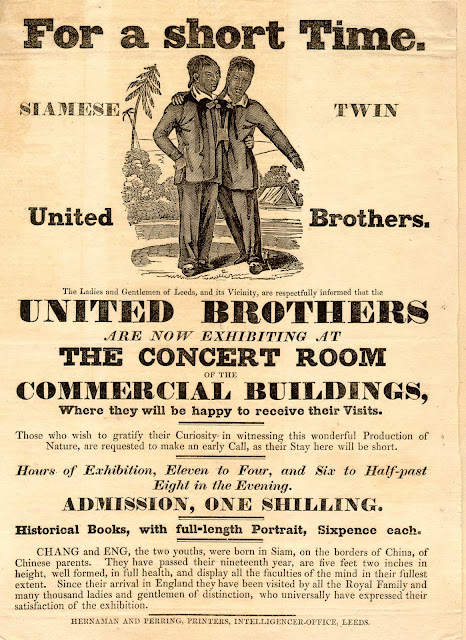 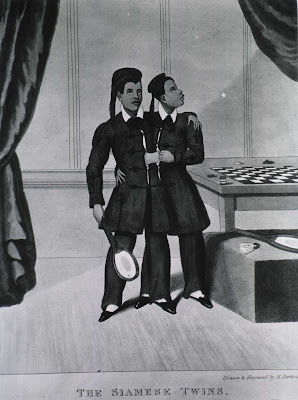 In 1839 they both retired, living in North Carolina where they purchased a plantation.  By 1844, they changed their names, taking the surname of Bunker, and becoming United States citizens. Both of the twins had also married – Eng to a Sarah Ann Yates, and Chang to her sister, Adelaide. 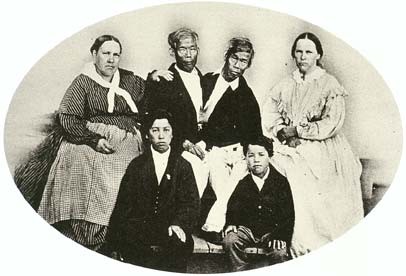 They had an interesting domestic arrangement, in which the two couples shared one bed, especially constructed to accommodate four adults. But despite many children being born – ten to Adelaide and Chang – eleven to Sarah and Eng – the course of their love did not run smoothly.

The sisters - who do look formidable - began to argue between themselves and eventually decided to set up separate households, with the twins then moving between the two. 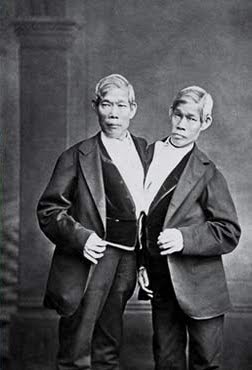 After the American Civil War, when their plantation and its slaves were lost, the twins were forced to go back on the stage, but they never achieved quite the same success as that attained in earlier years. 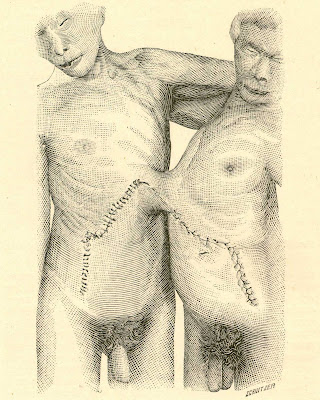 A drawing of the autopsied twins

Chang and Eng died on the same day, in January 1874. Chang had contracted pneumonia and when Eng woke to find his brother dead, despite pleas from his loved ones to allow a doctor to operate and perform a separation, he refused to be parted from his twin, also dying within a matter of hours.

The twins bodies were then the subject of a medical autopsy.  Their fused liver is still preserved to see at the Mutter Museum in Pennsylvania. 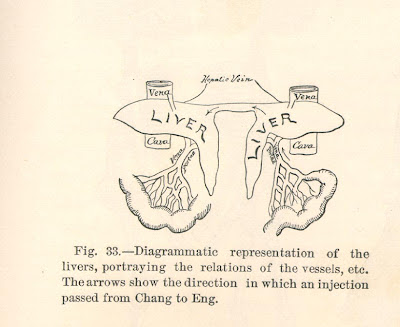 Mark Twain wrote a short story based on the lives of the brothers. It is called The Siamese Twins.
In 2000, Darin Strauss also wrote his novel, Chang and Eng. It went on to win several awards, and the following description is taken from Publishers Weekly ...

In his stunning debut, Strauss fictionalises the lives of famous conjoined brothers Chang and Eng Bunker, whose physical oddity prompted the term Siamese twins. With compelling characterisations and precise, powerful prose, this audacious work should appeal equally to fans of historical, psychological and literary fiction. Born in the Kingdom of Siam in 1811, the twins... are completely separate individuals with different personalities and needs. Serious and reserved Eng narrates their story, which begins on their parents' boat on the Mekong River...An unscrupulous American promoter brings them to America in 1825. Eng reads Shakespeare, preaches temperance and, all his life, wishes desperately to be separated. Chang is outgoing and garrulous, drinks heavily (which angers Eng, who must also experience the effects of Chang's indulgence) and cannot see himself as less than two. As young boys, the first time the brothers see other children their own age, their philosophical differences are apparent: "'They are half formed!' Chang whispered. To me [Eng] they seemed liberated." The brothers find celebrity as a circus act (displayed in a cage) in the U.S. and abroad...The author gracefully confronts the complicated issues of race, gender, infidelity, and identity, as well as the notion of what is normal. Strauss's vivid imagination, assiduous research and instinctive empathy find expression in a vigorous, witty prose style that seduces the reader and delivers gold in a provocative story of two extraordinary men who wish only to be seen as ordinary. 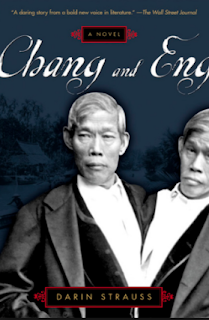