THE TERROR OF SPRING HEELED JACK... 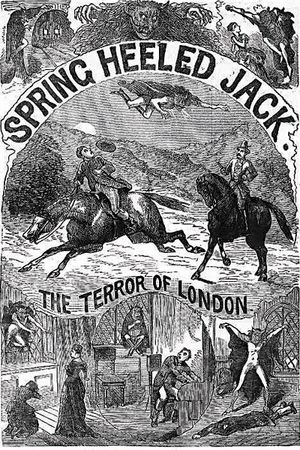 'Did you know there are hogs living wild in the sewers, breeding as fast as rats, and rats that grow to the size of dogs, that would tear out your throat and drain your blood if you so much as dared to cross their paths? And tonight I was reading of Spring Heeled Jack – a supernatural being who once caused a spate of hysteria among half the women of London town, tormenting them with his blazing red eyes and his fingers like claws and a mouth that could vomit blue tongues of fire. Imagine being confronted by that! The ugliest of customers! A Murderer. A demon from Hell! Well, that’s what all the headlines said. But never once was that devil caught because of the springs that were fixed to his boots, that gave him the power to fly over walls, after nobbling his victims half out of their wits – and some of them really did go mad, thereafter committed as lunatics.'

From Elijah's Mermaid by Essie Fox

The VV assures you each word of that extract above is true ... and that she herself near died of fright when accosted last year by Spring Heeled Jack.

It occurred after visiting old friends (a most delightful evening, with apple bobbing and popping nuts, and staring at our reflections in mirrors in the hope of capturing a glimpse of the face of one's future husband - or wife), and when it was time to venture home, rather than hailing a hansom cab, the VV decided to take the air, walking alone through the narrow streets.

Oh, what a foolish decision that was, for with the air so murky and thick, and no moon to give the faintest light, the VV found herself quite lost;  chilled to the very core of her bones when so closely wrapped in that shrouding fog. She could have imagined herself anywhere, even the wilds of Exmoor...and that sudden hot breath upon her cheek that caused every fibre of flesh in her body to prickle and shiver with the dread - why, it might be the Hound of the Baskervilles! 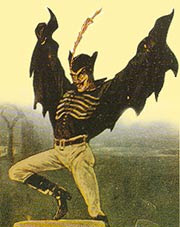 When the VV dared to stop and turn, as the drifts of fog began to part she heaved an enormous sigh of relief, for she saw no rabid beast at her side, only an elegant gentleman attired in a long black evening cloak. But – oh – when he lifted his face and arms, when the cloth of that outer garment was spread, she would swear it was the devil himself come in place of the hell hound Cerberus. Even now she might faint to recall his eyes, two fierce round balls of gleaming fire – and how, when he opened his mouth to laugh a stream of pale blue flames shot out, and so rank and thick with the phosphorous she could hardly gasp a single breath.

And there the terror did not end. His body was clad revealingly, in some sort of tight white oilskin. Upon his head were two black horns. At the end of every finger was a claw of metal, sharp as knives. And then, with the VV about to collapse, with the hands of that demon reaching out and shredding her outer garments to ribbons, when he touched her exposed and trembling flesh, his own felt as clammy and cold as a corpse - at which point she finally found her voice, letting out a piercing scream that, luckily, stunned her assailant a while – just long enough for some residents to hear them and open up their doors. At that point the monster leered once more before jumping at least twenty feet in the air and clearing the railings of a park as if he'd grown two wings to fly - just as if he had springs in the soles of his feet. 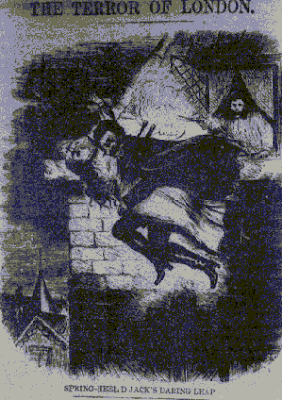 You may laugh at such a description now. You may ask if the VV had perhaps been drinking a little too greedily of her friends' delicious Madeira wine. But then, she was not the only soul to witness the terror of Jack that night.

Attempting to avoid the fiend when he suddenly ran into the road, a coachman almost crashed his cab and later describing the shock he'd had when seeing the fiend's vile features, and the sound of his chilling laughter. In Kensington, Hammersmith ... Ealing too ... several servant girls were traumatised; some wounded and scarred by the touch of his claws, one of them taking to her bed when the horror brought on a delirious fit. Many newspapers carried reports that in Stockwell, Brixton, and Camberwell innocent women had died of fright. The Times - perhaps somewhat tongue in cheek -  posed the question as to whether or not this could be the same ‘Spring Heeled Jack who had found his way to the Sussex coast’  where a gardener in Brighton had described his meeting with the growling fiend before it leapt over a high brick wall – though on closer investigation it transpired it could have been a dog. 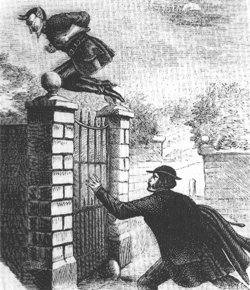 Whether Spring Heeled Jack is real or the result of an urban rumour put about by - ahem - unscrupulous types, the tales of his exploits are taking hold on Victorian imaginations. There is quite a mass hysteria. The police are searching everywhere. There are even requests for the Lord Mayor of London to help in ensuring the ghoul's apprehension.

Even so, Jack refuses to fade away. Accounts of his daring exploits are becoming a regular feature in some of the Penny Dreadfuls. Local theatres hold dramatisations, and the character has now appeared in several Punch and Judy shows – with many a naughty boy or girl being warned that the spring-heeled bogeyman might well be sent to peer in through their bedroom windows late at night.

So, remember, as the nights draw in, lock your doors, close your shutters, and draw your drapes. And, if you must walk through gloomy streets beware any gentlemen coming near. Dear ladies, do heed this good advice. Keep your virtue and your wits intact. Avoid the glare of fiery eyes. 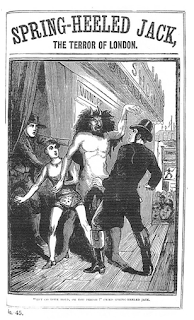