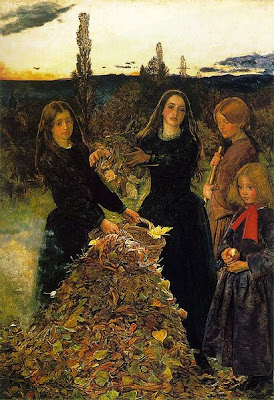 At this time of year, when the last of the leaves are falling, the air fogged and tinged with bonfire smoke, the VV is reminded of Autumn Leaves, a painting by John Everett Millais in which his wife's younger sister Sophy is posed as the girl who is throwing more leaves onto the smoking pyre. The picture is full of symbolism - the fires of passion about to catch light, the death of youth and innocence, and the questioning look in Sophy's eyes as they stare straight out of the picture's frame. In contrast, the other girls hold expressions very much 'simpler', all still engrossed in the pile of leaves rather than who might be watching them. 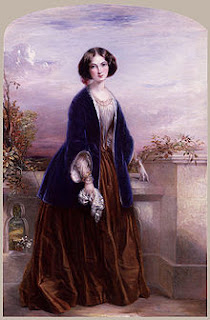 Effie Gray (1828-1897) painted by Thomas Richmond
Some time before commencing this work, Millais had been involved in one of Victorian England's most celebrated scandals. The young member of the Pre-Raphealite Brotherhood had been a protege of John Ruskin, the academic, artist and critic - until Millais started to fall in love with Effie, Ruskin's wife.
But, there is so much more to this story than mere gossip and titillation and, having gained access to some of Effie Gray's private letters and diaries, Suzanne Fagence-Cooper has recently written an excellent book which examines the characters actions and motivations in detail.

The Model Wife: Effie, Ruskin and Millais presents Ruskin as a man of great talents but over fastidious inclinations which rendered him as being cold and detached from reality, a trait that eventually caused his passionate and attractive wife to be plagued by nervous ailments.
Effie wrote candidly to her own father: "He alleged various reasons, hatred to children, religious motives, a desire to preserve my beauty, and finally this last year he told me his true reason...that he had imagined that women were quite different to what he saw I was, and that the reason he did not make me his Wife was because he was disgusted with my person..."
Later, much gossip was to arise regarding the true cause of Ruskin's disgust - assumed to be a horror of female pubic hair, or else that of menstruation. 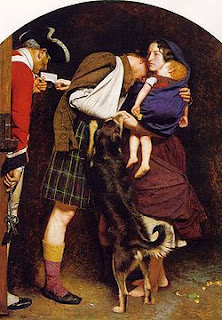 But, Effie did not repel all men. Far from it, she was very popular. When Millais was invited to join the Ruskins in Scotland, there to paint the husband's portrait, he was more inclined to spend his time in sketching the wife who modelled for his painting, The Order of Release (shown above). And, at night, when separated by only a thin partition wall in the lodge where the trio were staying, Millais could hear every movement and breath of the woman with whom he became obsessed - and no doubt he also realised the lack of physical intimacy within the Ruskins' marital bed. 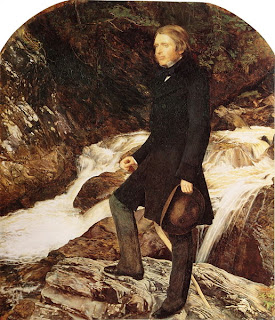 Millais' portrait of John Ruskin
Soon after that holiday Effie left her husband and bravely faced the public disgrace of petitioning for divorce which was granted on grounds of non-consummation, but only after medical examinations that proved she was still a virgin. With her marriage to Ruskin nullified, she and Millais were free to wed and as time went by they found themselves accepted by London society where, due her Effie's hosting skills and her husband's undoubted talent they gained great social standing and wealth. Millais even received a knighthood.

Suzanne Fagence-Cooper's book provides a fascinating insight into this complex story, with much reference to Effie's family and to her husband's artistic works - which brings the VV back to Autumn Leaves, for in addition to the sensation regarding Effie's divorce this book held something of particular interest, specifically in the later chapters which deal with the character of Effie's younger sister, Sophy - for here was another love triangle concerning Effie and her husband. 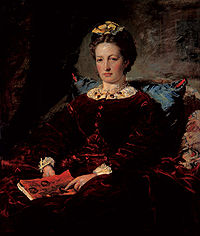 Effie in middle age
Like Effie before, Sophy was growing into a beautiful young woman. Unlike Effie, she had not begun to be worn down by the routine of domesticity and the trauma of regular childbirths. Millais was known to have an eye for attractive models, and with his wife otherwise occupied he was increasingly drawn to paint his younger, prettier sister-in-law. Through the many canvasses produced the viewer is able to see Sophy's transition from the child on the cusp of adulthood represented in Autumn Leaves, to the alluring vision of sensuality found in later studies - such as the portrait below where the flushed face is all too knowing, where the red lips signify seduction, where the heart embroidered on the breast of the gown is a blatant statement of the growing affection between artist and muse.

Sophy
Whatever happened, or did not, while Sophy posed for Millais there was talk of Effie being upset and arguments breaking out in the house resulting in Sophy being asked to leave. At the age of twenty-four, Sophy suffered a nervous breakdown, going on to exhibit all the classical signs of annorexia.
Was it the result of a broken heart, of wishing to retain the shape and form that had most beguiled her brother in law? We shall never really know. Suzanne Fagence-Cooper exposes a great deal and the rest we can only go on to deduce.
If you enjoyed this post, you may also like:
THE VIRTUAL VICTORIAN: JOHN EVERETT MILLAIS (1829-1896)
Posted by Essie Fox at Saturday, November 20, 2010