'I HAVE SEEN MY DEATH': THE STORY OF THE ROENTGEN RAY... 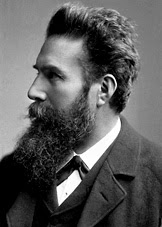 Wilhelm Conrad Rontgen (27th March 1845 – 10th February 1923)
The first X-rays, or electromagnetic radiation, were in their earliest days also known as Roentgen rays, named after the German scientist who discovered them, for which he received the Nobel Prize in Physics in 1901.
A modest and humble man who preferred to use the term X-ray, rather than to publicise his own name, Roentgen refused to patent his work believing it should be available for all mankind to benefit from the fruits of his scientific career - which began in 1865 when studying mechanical engineering at the University of Zurich. Thereafter he was constantly involved in lecturing and research, and was due to take up an appointment at Columbia University in New York when the outbreak of World War 1 led him to remain in Munich. 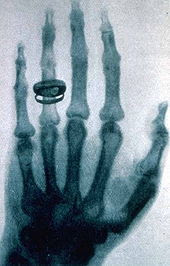 'I have seen my death.'
In 1895,  when Roentgen was experimenting with cathode rays, passing an electrical current through some gas in vacuum tubes, he decided to seal the tubes in thick cardboard cartons, thus excluding all external light while allowing the rays of fluorescent light to shine through onto other objects. When he placed his wife’s hand in the path of the rays, in front of a photographic plate, the ‘light picture’ then created was quite astonishing, for it showed not the flesh of her hand but the bones of the skeleton within resulting in her famous quote: ‘I have seen my death’.
The VV is very glad to say that due to her husband’s careful use of materials such as lead to shield the rays with which he worked, the Roentgens both lived well into old age.
Posted by Essie Fox at Thursday, January 27, 2011

Email ThisBlogThis!Share to TwitterShare to FacebookShare to Pinterest
Labels: X-RAYS. ROENTGEN. I HAVE SEEN MY DEATH.