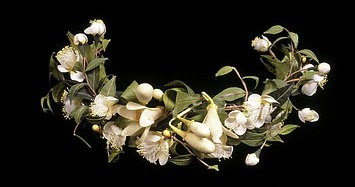 This is a Victorian bridal wreath made of wax and cloth orange and myrtle flowers. 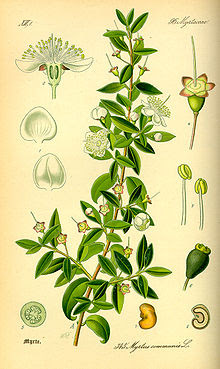 Dating back to ancient times, the fragrant white blooms of the myrtle plant were often viewed as sacred, representing not only love and desire, but also immortality. The plant was strongly associated with images of Aphrodite and Venus, the goddesses of Greek and Roman love. The Three Graces who waited on Aphrodite, and who symbolised all femininity were often crowned with  myrtle wreaths. And, in Roman tradition, oils pressed from the leaves were used for healing and soothing wounds, as well as scenting the ritual baths taken by brides before they wed. 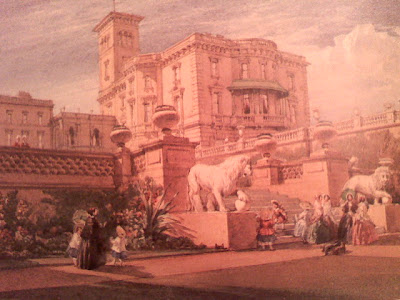 Osborne House from below the Terrace by W. L. Leitch
In Victorian times the myrtle flower was said to bring  luck and fidelity and, although her wedding bouquet was comprised solely of snowdrops, Queen Victoria had a myrtle plant of her own, grown along the terraced walls in the gardens of Osborne House, propagated from a sprig in a nosegay given by Prince Albert’s grandmother when the couple visited Germany in 1845. 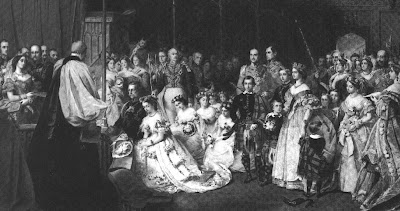 The Wedding of Princess Victoria
Later, when Queen Victoria’s daughters wed, Victoria, Alice, Helena, Louise and Beatrice, all carried bouquets which contained blooms from that very plant in Osborne House – as did Katherine Middleton today, when she married Prince William in Westminster Abbey.