ON ASYLUMS AND FAMILY SECRETS...

This is a personal story in memory of Mary, my great-grandmother, whose fate I only came to discover after writing about a Victorian asylum in my novel, Elijah's Mermaid. 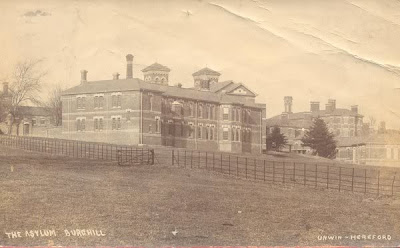 As a child, whenever I misbehaved and my mother’s patience was pushed to its limits, she would sometimes shout at me, ‘You'll send me to Burghill, you will!’

Whatever could this Burghill be, to hold such a terrible sense of threat? Well, apparently, it was a village where the local county asylum was built, and within that asylum’s walls my maternal great-grandmother lived, and died.

Only recently did my mother confess this awful truth of our family’s past. Before that my knowledge of Burghill was a memory from my teenage years, when I once accompanied my stepfather on a visit to one of his relatives who suffered from schizophrenia.

At that time the old Victorian asylums were being prepared for closure, most of their inmates to be re-homed, or cared for ‘in the community’. Since 1994, when Burghill was finally shut down, the land was sold to be redeveloped for homes – a far cry from 1871 when a sprawling gothic mass was built to accommodate more than 500 souls.

The institution covered ten acres, larger than the one in my novel. There were 100 acres of gardens, farm buildings and cottages, a chapel, a brewery, a laundry, and even a gasworks in the grounds for providing all the lighting needs. With regular dances and concerts to give patients a sense of normality, the community was managed well, with no records of unusual deaths that resulted in other hospitals, where suicide or homicide were sadly not uncommon events.

However, I have no idea if, in the asylum’s early days, any Victorian ‘cures’ had been employed, such as those described in my novel – when patients were ‘treated’ in baths of water alternately freezing cold or hot, or spun around on twirling chairs, or placed in drug-induced comas, or – horribly drastic though it sounds – forced into having clitorectomies, or the total removal of their wombs: supposed at the time to be the source of female ‘hysteria’.

Regardless of whether such barbaric acts were employed at the Burghill asylum, I cannot ignore the nagging fact that many of its inmates must have suffered confusion and misery. What of the patients not mad at all? Those who suffered from tuberculosis, or Down’s syndrome, or who had been born deaf, or dumb, or blind?

Looking back to the time of my visit, I wonder if something deep inside had sensed my great grandmother’s presence there, when I clutched onto my stepfather’s hand and walked the asylum’s corridors, when I heard mournful sighs and moans coming from behind closed doors, or saw women who rocked back and forth on their chairs – and one who smiled and reached out her arms to me, thinking we were related.

Sadly I was not. My great-grandmother had long been dead. And now, I know that when she lived her arms were constrained by straitjackets. Her condition had been violent. But then, she would have been in pain. When she died, when an autopsy was performed, a tumour was found inside her brain. Today there might be a medical cure, at the very least appropriate drugs to ease the torment that she felt.

But there her tragedy does not end. When the asylum authorities wrote to inform the family about my great-grandmother’s death, somehow that letter was lost. By the time her husband heard the news and arrived to fetch his wife back home, she was already buried, her body laid in an unmarked grave; not even given a funeral.

What anguish must the man have felt? But he was not the only one. Recently, when the local authorities were disposing of the asylum’s records, they organised a ceremony for all the patients who lay in the unmarked grave. A funeral service was organised, at which 2,000 patients were named. When the ceremony ended 2,000 daffodil bulbs were planted in the soil above the grave: a beautiful, tribute to bloom each spring – to shine in the light, for all to see.

This article was originally published in The Bookseller/We Love This Book feature.
Posted by Essie Fox at Saturday, November 17, 2012