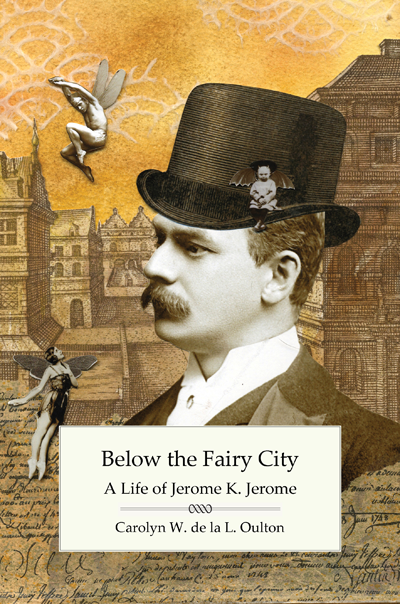 The VV does love the cover of Below the Fairy City: A Life of Jerome K. Jerome which is written by Carolyn W. de la L.Oulton and published by Victorian Secrets.

When most of us think of Jerome K. Jerome, it is with Three Men in a Boat in mind - a comical satire on the middle class of which many dramatisations have been made. However, there is much about Jerome K. Jerome's life that has been left unexplored. Working as a humourist, novelist, journalist, essayist and dramatist, Jerome K. Jerome had an 'interesting' attitude to his career and is known for this humorous statement: "I like work. It fascinates me. I could sit and look at it for hours."

The following guest post by Carolyn W. de la. L.Oulton gives a little more insight into the reason for such a statement - and also the flavour of her book - a must for all students of Jermome K. Jerome... 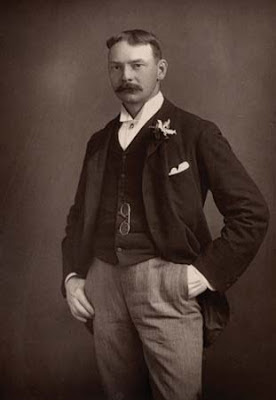 Born in Walsall in 1859, Jerome K. Jerome is of course most famous for his three men and that boat written thirty years later, and Oxford has been dining out on him ever since.

In his lifetime however it was London with which he was most closely associated, causing him to lament on one occasion that: Whenever the superior book-reviewer, sampling a new work of mine, has expended on me all his stock epithets of cad, boor, blackguard, snob, liar, brute, bank-clerk, new humourist, thief, upstart, and suchlike subtle thrusts characteristic of the new criticism, he invariably concludes his “notice” by calling me a “Cockney.” … I have never been a bank-clerk. I have served as clerk in most other offices, but never in a bank. To call me “Cockney” is even more unjust. Meaning from the beginning to be a writer, I took the precaution of selecting my birthplace in a dismal town in the centre of the Staffordshire coalfields, a hundred and fifty miles, at least, away from London.

Jerome moved from Staffordshire to London at the age of three, and his first memories were of a shabby genteel house in Poplar, where his parents scrubbed their own doorstep by night to persuade the neighbours that they kept a servant, while he himself was routinely attacked by street boys (because, his mother assured him, he was a gentleman). His father, also called Jerome Jerome, died in 1871, and after a cursory education at the Marleybone Philological School, the fourteen year old Jerome began work as a clerk for the London and North Western Railway in 1873. Like other Victorian writers he seems to have been propelled by his family into a sensible rather than a congenial career, and after the death of his mother in 1875 he began a more bohemian existence, moving around dingy lodgings in the neighbourhood of Camden, while spending his leisure hours in the stalls of various theatres.

By 1878 he had thrown in his job, much to the horror of his two older sisters, and was acting at Astley’s in a series of minor roles. As he recalled late in life, 'At Euston, I was earning seventy pounds a year, and I might become general manager. I pointed out to them that, instead, I might become London’s leading actor with a theatre of my own. But they only cried.’

What actually happened after the end of the season at Astley’s was that he played supporting roles, including Whittington’s cat, for a string of itinerant companies, before ending up back in London penniless in 1880. For the next few months Jerome was literally living on the streets, before being rescued by an acquaintance, who found him work and quite possibly a lodging. This was 36 Newman Street, Cavendish Square, where Jerome famously met the bank clerk George Wingrave who would take on one of the starring roles in Three Men in a Boat in 1889. 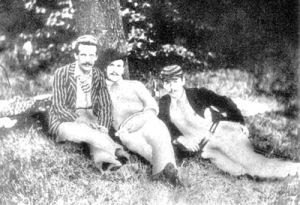 For most of the 1880s Jerome was working on the Strand, as a shorthand writer and solicitor’s clerk. Three Men in a Boat was written in a flat in Chelsea, where he was living with his new wife, but for years after he became famous he continued to work to an exhausting schedule in Arundel Street. It was here that he set up headquarters for two journals in the 1890s, the weekly To-day and the monthly The Idler. Between them these journals managed to capture and in some cases ‘discover’ some impressive writers, including Gissing, Mary Braddon, H. G. Wells and the now less familiar Barry Pain, Israel Zangwill, Pett Ridge and W. W. Jacobs. In their pages Jerome’s team of writers debated topics from who should succeed Tennyson as Poet Laureate, to ‘The Man in Love. Is he ridiculous or sublime in the eyes of the loved one?’

Unfortunately To-day also ran an ill advised series of articles accusing a wealthy industrialist, Samson Fox, of peculation on a grand scale. Unsurprisingly Fox sued, and the prohibitive costs of the defence left Jerome in debt once again by the end of 1897. Bitter and humiliated, he decamped to Germany with his family and when he came back to England in the early 1900s, it was to settle quietly in the Oxfordshire countryside.

But in the last few years of his life, Jerome returned to live in London with his wife. Able once again to live in comfort himself, the cruelty of the city still haunted his imagination. As he put it in his autobiography My Life and Times in 1926, ‘Grim poverty lurks close to its fine thoroughfares, and there are sad, sordid streets within its wealthiest quarters. But about the East End of London there is a menace, a haunting terror that is to be found nowhere else.’ 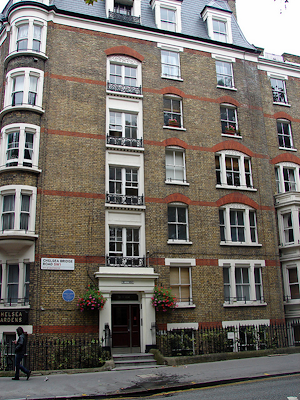 Jerome died on 14 June 1927, and two plaques have since been put up in his memory. One is attached to the large town house in Walsall where he was born before his father’s catastrophic business failure; the other is an English Heritage blue plaque commemorating the writing of Three Men in a Boat at 104 Chelsea Gardens. There is no visual record of his time in the poverty stricken East End of London, what he once called ‘‘the city of the gnomes who labour sadly all their lives, imprisoned underground… deep down below the fairy city’ of the West End.


Dr Carolyn Oulton is a Reader in Victorian Literature and Co-Director of the International Centre for Victorian Women Writers at Canterbury Christ Church University.

Victorian Secrets has published a Kindle version of Three Men in a Boat which can be purchased here. 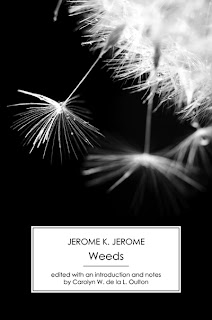 Victorian Secrets has also published Weeds - a significant departure for Jerome K Jerome, being a disturbing story of sexual corruption in which marital fidelity is a perpetual struggle. It offers a contemporary debate on social degeneration and the emergence of the New Woman.
Posted by Essie Fox at Friday, January 04, 2013