THE WORST NOVELIST IN HISTORY... 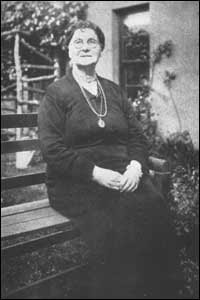 The worst novelist in history is how some cruel-hearted souls once referred to an Irish writer by the name of Amanda McKittrick Ros. Of her Victorian contemporaries, Mark Twain was said to be a fan - though the VV wouldn't be surprised if that was because he was so amused when reading of eyes as 'piercing orbs', or legs described as 'bony supports', or that to blush is to be touched 'by the hot hand of bewilderment.' 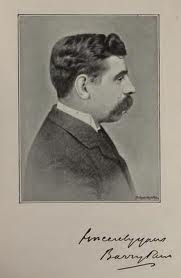 One of her most outspoken critics was the poet Barry Pain. He was very far from charmed when he wrote this review of the author's work -

“The book has not amused. It began by doing that. Then, as its enormities went on getting more and more enormous in every line, the book seemed something titanic, gigantic, awe-inspiring. The world was full of Irene Iddesleigh, by Mrs. Amanda McKittrick Ros, and I shrank before it in tears and in terror.”

Had he read her novel, Six Months in Hell?

However, McKittrick Ros could hold her own with any critic's jibes. She referred to those who abused her work as the 'auctioneering agents of Satan' , or  'bastard donkey-headed mites', or the 'clay crabs of corruption'. She also claimed their venom was the direct result of jealousy - or else of being secretly in love with her.

She had such faith in her person, and talent. She firmly believed that her own work compared with that of Daniel Defoe, George Eliot, or Dickens. What's more, she was sure it would be known for more than 1000 years to come.

She had great expectations. When she heard of the Nobel Prize for Literature, she contacted her publisher to say, 'What think you of this prize... Do you think I should make a dart for it?'  She had no doubt whatsoever that the world would clamour to read her work, because it was exceptional literature.

It certainly was unique. In her novel, Helen Huddleson, most of the characters are named after fruits or vegetables - with Lord Raspberry, Sir Christopher Currant, Madam Pear, and Lily Lentil. 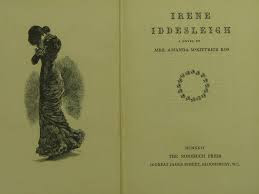 And these are the opening lines of the novel, Irene Iddesleigh which, if anyone is inspired to read, is available free on Kindle -

"Sympathise with me, indeed! Ah, no! Cast your sympathy on the chill waves of troubled waters; fling it on the oases of futurity; dash it against the rock of gossip; or, better still, allow it to remain within the false and faithless bosom of buried scorn,"

The VV is particularly fond of the mention of private parts as being the 'fleshy triangle' in this, the first occasion when the lovers Delina Delaney and Lord Gifford chance to meet -


"Could a king, a prince, a duke – nay, even one of those ubiquitous invisibles who, we are led to believe, accompanies us when thinking, speaking, or acting – could even this sinless atom refrain from tainting its spotless gear with the wish of a human heart, as those grey eyes looked in bashful tenderness into the glittering jet revolvers that reflected their sparkling lustre from nave to circumference, casting a deepened brightness over the whole features of an innocent girl, and expressing, in invisible silence, the thoughts, nay, even the wish, of a fleshy triangle whose base had been bitten by order of the Bodiless Thinker."

What more is there to say? Oh... has the VV mentioned that McKittrish Ros was a poet as well as a novelist? No? Well, perhaps that particular joy should be savoured on another day.