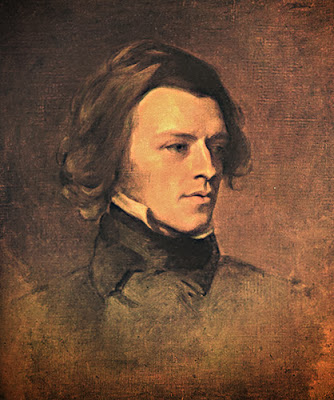 Tennyson as a young man -  by Samuel Laurence

I have spent the last three years happily researching certain aspects of Alfred Tennyson’s life - his childhood, his familial relationships with his parents and siblings, his education, and his adulthood. I was also curious to find out if Tennyson had a dark side, be it demons or bad habits as those exhibited by his friends from the Pre‐Raphaelite Brotherhood, or in his literary circle of friends. Mr. Dickens, this means you!

It seems there was no mistress hidden in a love nest, or anything sinister at all. Tennyson enjoyed to go drinking with friends or when he travelled on business to meet with his publisher, Edward Moxon. But he always wrote home to his loved ones and was even known to send money to his ageing relatives. So, was Alfred Tennyson, Poet Laureate, perfect? Of course not. No human being is.


Tennyson’s worst quality perhaps was his sensitivity to criticism of his work. I believe this is what brought him to his ‘lost ten years’ as a young man when, during the period from 1832‐42, there is little about him to be found. If you believe the stories, this was the time when Tennyson had a breakdown following the death of his father in 1831, and then the death of his dear friend, Arthur Hallam in 1833 – the friend for whom he went on to write In Memoriam. But was he in a local hospital being treated by a Dr. Allen, or was he living at his father’s rectory in Somersby, along with his other siblings? 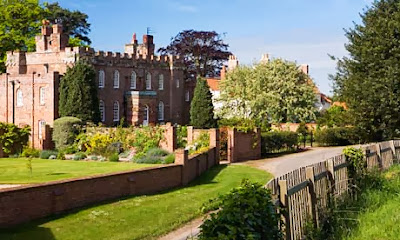 The rectory at Somersby


Some claim that he stayed in the house alone and wrote what became some of his greatest works, which included The Lady of Shalott, Maud, and Locksley Hall. Others say he was too distraught and also suffering from gout which prevented him writing anything. However, it is my firm belief (based on evidence from various letters sent from hotels and lodging houses) that Tennyson chose to use those years for travelling and writing, until he was emotionally ready and had the financial stability for what he called the ‘worthiness’ of finding himself a wife!


Not that women were absent from his life. Before 1842 (the year Tennyson met Emily Sellwood who he went on to marry) there were two women who ‘intrigued’ him, namely Rosa Baring and Sophy Rawnsley. 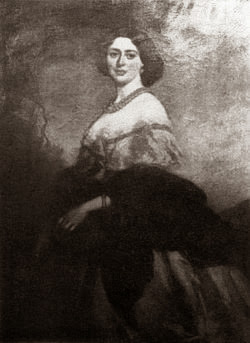 Rosa Baring was the daughter of a wealthy family who, from 1825, leased and lived at Harrington Hall which was situated on a grand estate just two miles from the Somersby rectory where Tennyson was raised. Sixty years later the poet would go on to use the house as a setting in his poem, Lockesley Hall -


Yonder in that chapel, slowly sinking now into the ground,
Lies the warrior, my forefather, with his feet upon the hound.
Crossed! For once he sailed the sea to crush the Moslem in his Pride;
Dead the warrior, dead his glory, dead the cause in which he Died. 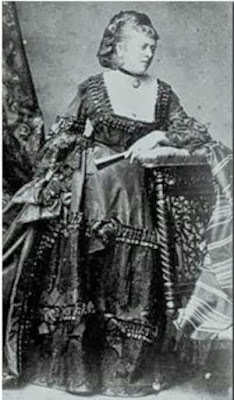 A photograph of Rosa in later years

Tennyson’s father would no doubt have recognized the potential in his son making a match with the daughter of such a rich family. Indeed, Rosa herself believed Alfred's interest was based on his need for money to secure his social ambitions. But Tennyson was more concerned with the attraction of her dark beauty, a sexual interest of which the young woman could not have been unaware.

Here, Drummond Rawnsley explains in his Memories of the Tennysons -

"She and her companions round Somersby, who were not too frightened of him, hung upon the words of the quaint, shy, long‐haired young man, who had in his boyhood’s day made an impression of being more learned and more thoughtful than was common, and of being wise beyond his years. She would tell of how she and one of her girl friends, in admiration of the young poet, would ride over to Sombersby, just to have the pleasure of pleasing him or teasing him as the case might be. From time to time he would write a verse or two for one or other of the girls who had been with him at a picnic in the woods, or send some little verse of reconciliation after a tiff at a dance; and although she confessed that all poetry in those days seemed to her mere ‘jangledom,’ yet it was always delightful to her to believe that the rose of the ‘rosebud garden of girls,’ had reference to her.”

Did Tennyson write this poem to Rosa in 1834?

Rosa Baring was the inspiration for Tennyson’s poem, ‘The Gardener’s Daughter’ written during his friendship with Arthur Hallam; displaying a theme of friendly rivalry. 'The Gardener's Daughter' was Tennyson's love poem to her.

Requiring at her hand the greatest gift,
A woman's heart, the heart of her I loved;
And in that time and place she answered me,
And in the compass of three little words,
More musical than ever came in one,
The silver fragments of a broken voice,
Made me most happy, faltering, "I am thine.”


The following hints at a less harmonious relationship, and may well also tally with some sort of disagreement between Rosa and Tennyson after a dance, when he wrote ‘To Rosa’ in 1836:

Sole rose of beauty, loveliness complete,
If those few words were bitter or unjust,
Yet is thy gentle nature so discreet
That they will pass thee like an idle gust.


Sadly, by 1836, the relationship had run its course. There is some discrepancy regarding the actual facts, but the legend goes that Tennyson proposed and that Rosa then turned him down - being unable to consider marriage to such a poor man! What remains of their love is this final stanza:

How thought you that this thing could captivate?
What are those graces that could make her dear,
Who is not worth the notice of a sneer
To rouse the vapid devil of her hate?
A speech conventional, so void of weight
That after it has buzzed about one’ s ear
Twere rich refreshment for a week to hear
The dentist babble or the barber prate
A perfect-­‐featured face, expressionless,
Insipid, as the Queen upon a card. 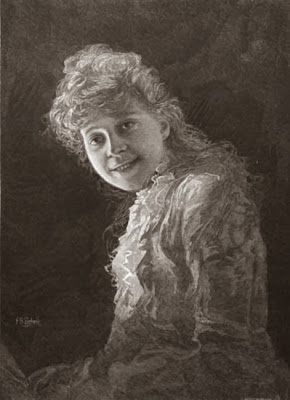 An image to depict Sophia Rawnsley (1818-1889)
From Beauties of Tennyson, to illustrate Airy, Fairy Lilian - via Project Guttenberg

In 1830 when he was twenty-one and she was only twelve years old, Tennyson wrote ‘Lilian’ for Sophia (also known as Sophy) Rawnsley -

It is doubtful that Tennyson looked on Sophia with any romantic interest. But she was clearly an attractive girl, and, after attending a party at which all three were present, his sister Emily recalled Sophy as being, ‘the lightest and most indefatigable dancer I ever saw, she was a very amiable girl, and so cheerful and happy that it brings sunshine into one’ s heart.’

The Rawnsleys and some Tennyson family members believed that if there were any ‘calf‐love’ (puppy love) as they called it, it would have occurred between 1835‐1836 by which time Sophy had grown into the beautiful and vivacious young woman who inspired two other interesting poems.

The first is as follows -

Sweet, ask me not why I am sad,
But, when sad thoughts arise,
Look on me, make my spirit glad
To gaze upon thine eyes.
For how can sorrow dwell in mine
If they might always gaze on thine?

The second is more significant, being ‘sent to her after a little tiff at a Spilsby ball’ -

It were, O Heaven! A stranger tale to tell
Than if the vine had borne the bitter sloe:
Tho’ I was harsh, my nature is not so:
A momentary cloud upon me fell:
My coldness was mistimed like summersnow;
Cold words I spoke, yet loved thee warm and well.
Was I so harsh? Ah, dear, it could not be.
Seem’d I so cold? What madness moved my
Blood To make me thus belie my constant heart
That watch’t with love thine earliest infancy,
Slow‐ripening to the grace of womanhood,
Thro’ every change that made thee what Thou art.

Although, Tennyson alluded to a romantic gesture in ‘To Sophy,’ if any relationship occurred then any family members kept that information to themselves. There is a surviving letter that Tennyson wrote to Sophy but it is not overly romantic in tone,

This is to let you know that you need not restrain from bestowing a tender osculation on Whom‐have­‐I­‐in‐Heaven from fear of imparting any inflectionless tender than that of the heart, as Mr. Snaith pronounces the rubescence on the back of my hand to be nothing but a slight irregularity of the liver, which indeed the old Romans took to be the seat of love.

I am, dear Sophie
Always yours
AT

Later in life, Sophy Rawnsley remembered the Alfred from her youth as being "so interesting because he was so unlike other young men, and his unconventionality of manner and dress had a charm which made him more acceptable than the dapper young gentleman of the ordinary type, at ball or supper party. He was a splendid dancer, for he loved music, and kept such time, but, you know, we liked to talk better than to dance together, at Horncastle, or Spilsby, or Halton; he always had something worth saying, and said it so quaintly. Most girls were frightened of him. I was never afraid of the man, but of his mind.”

Kimberly Eve is a writer and researcher of the nineteenth-century, specialising in the Victorian era. She runs her own blog site - Musings of a Writer - and most recently has been quoted in Julia Margaret Cameron: The Allure of Photography by Bob Cotton, as well as having articles published on various websites concerning Alfred Lord Tennyson and The Bronte Sisters.
Posted by Essie Fox at Wednesday, October 02, 2013