THE MERMAID AND THE MARDEN BELL... 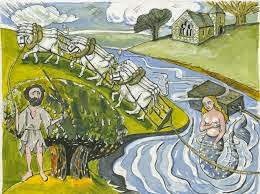 In the VV's novel, Elijah's Mermaid, two children in landlocked Herefordshire create a small grotto beside a stream in the hope of luring a mermaid to come along and live there.

Such an idea is not original, for there are some locals who still say that the sight of a mermaid in Herefordshire is very far from fantasy.


Back in 1848, when the river Lugg near Marden Church was being dredged of mud and sludge, the workmen discovered an ancient bell ~ the sort of bell that was often used when a church was connected with a saint when, according to Celtic tradition, such bells were considered sacred too. 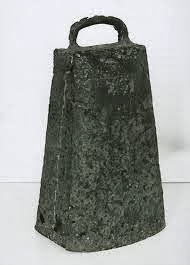 The Marden bell can now be seen in the Hereford museum. It is thought to be Welsh in origin and to date from between AD 600 - AD 1100.

As you will see from the image posted above, it is not of a circular construction, but made of two separate sections of metal which are then attached together. It looks like a cow or sheep bell. 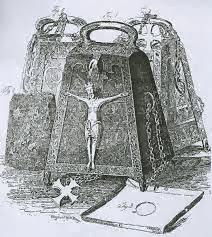 These bells were often 'enshrined' in ornately made iron casings, though if there was one for the Marden bell, to this day it has never yet been found. 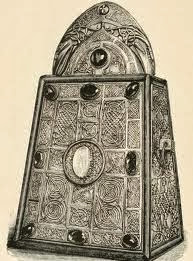 The Marden bell is thought to have been created in honour of Saint Ethelbert ~ the king who became a martyr when beheaded by King Offa. His remains were then buried at Marden.

At the time there were many rumours that Ethelbert's spirit haunted the place and, as a sign of repentance, King Offa ordered that a church should be built on the site of the dead king's grave. He also ordered the construction of the nearby Hereford Cathedral, to which Ethelbert's body was eventually removed, becoming a place of pilgrimage.

Many miracles are said to have taken place during the body's journey there. And, in Marden, from where it was exhumed, a well sprang up within the Church where it still remains in the western nave.

It is not known how the Marden bell came to be submerged in the River Lugg. But the myth of the mermaid who lived there predates its Victorian finding. Old timers say that she seized the bell when it was accidentally dropped, immediately dragging it down to the bottom of the river bed. At the time a local wise man said that the bell could be retrieved again if a team of twelve white heifers wearing yokes made of yew wood were somehow attached the treasure ~ which could then be pulled out of the water. But, the deed must be done in silence. If not, then it would always fail. And so it did when one of the men present at the ceremony forgot himself and cried aloud: 'In spite of the all the devils in hell, now we'll land Marden's bell.'

This outburst woke the mermaid who hung onto the bell with all her might before dragging straight it back down again, keeping it hidden from human eyes until the nineteenth century.

But, even to this very day, it is said that ghostly chimes are sometimes heard from the depths of the river bed ~ as if the mermaid rings it still.
Posted by Essie Fox at Thursday, March 10, 2016