THE TRADITIONS OF HALLOWEEN... 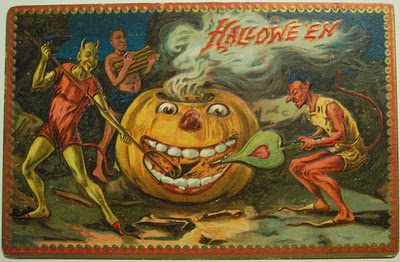 Halloween is a tradition made popular in America, where pumpkin lanterns in front of doors invite children to 'Trick-or-Treat 'while dressed in spooky fancy dress, as skeletons, witches, or ghosts – and sometimes even Dracula.


The supernatural or ‘Undead’ have some historical relevance regarding Halloween. Once known as Samain or ‘Sow in’, this ancient Celtic festival signified the new year, when the harvest had been gathered and the winter lay ahead. On its eve, October 31st, the divisions between the living and dead were said to part, almost like an open curtain, allowing supernatural folk and the souls of all the dead to walk about the world again. Bonfires were often lit to drive the risen dead away. If not, they were placated with the bowls of food and drink left on the steps of locked house doors.


The advent of Christianity appropriated many customs, with ‘All-Hallowmas’ or ‘All Saint’s Day’ revering saints and martyrs instead of ghouls and witches. The gifts of food became ‘soul cakes’ left  for the homeless and the hungry, in return for which they prayed for the souls of all the dead.


Many old superstitions have persisted through the years. American Irish émigrés replaced the smaller turnip heads with larger pumpkin Jack-o-Lanterns – Jack being the folklore rogue who was known to have offended  God and the Devil equally, for which he was excluded both from Heaven and from Hell, walking the earth till Judgment Day. 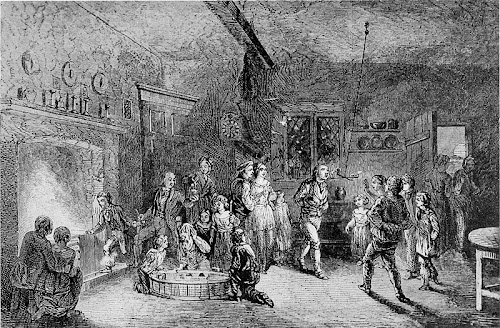 Other Celtic customs were described in Rabbie Burns’ famous poem, Halloween – where fairies dance one moonlit night while youths roam through the countryside, singing songs and telling tales, or joining fortune-telling games ~ such as eating apples while also looking into mirrors, that way creating magic spells to see a future lover's face. 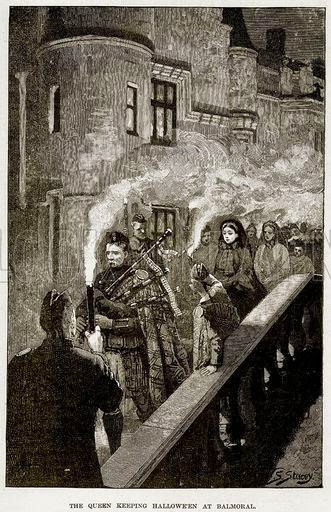 Whether Queen Victoria ever peered in such a mirror, she certainly entered the spirit of the Halloween tradition when she joined the annual fire-lit procession that took place in the grounds of Balmoral. However, back in England, the rise of the Protestant Church made these rituals less popular – perhaps explaining why Charles Dickens’ had a shock when he had gone to tour around America. What really piqued his interest, rather than the games (such a Pin the Tail on the Donkey, or Blind Man’s Buff, or Bobbing for Apples) was the morbid fascination that most people had with ghosts.


It was no coincidence that, after coming back to England, Dickens wrote A Christmas Carol, in which spirits and prophecies about the future are the basis of the story he created.
Other established authors also peeled back age-old layers of tradition and myth to recreate ‘All Hallows’ Eve’ – the genre that was popular in literature and art; with tales of children being stolen away by fairy folk, or mirrors showing future fates, or women wailing next to graves – all rendered yet more sinister when read by flickering candlelight to give an eerie atmosphere. 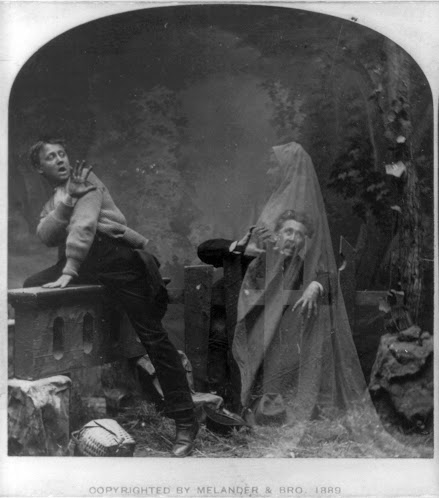 The Victorians really revelled in such ghoulish scary tales. They whole-heartedly embraced the culture of death, visiting spirit mediums, or else photographers who duped many clients to believe that double negative exposures revealed true visions of the dead. The images shown here may be somewhat tongue in cheek, but many others were believed to be entirely genuine. 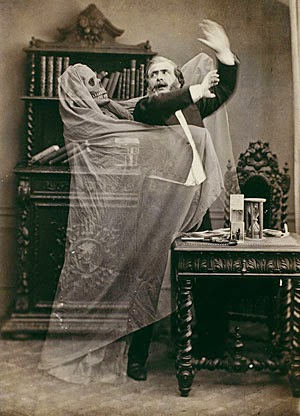 This article was also published in The Independent newspaper.
Posted by Essie Fox at Thursday, October 21, 2021