EATING WITH VICTORIA ~ A GREEDY QUEEN ... 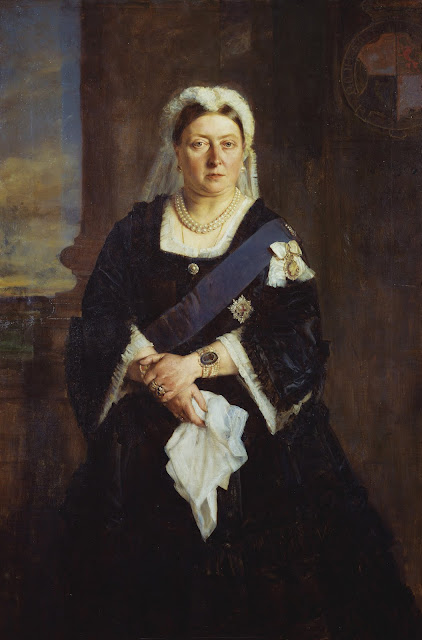 A Greedy Queen is my first book, but in some ways has been simmering away in my mind for a very long time. One of the various elements of my version of being a food historian (there’s no job description, and we all do different things), is that I work in costume. At one stage, I ran a highly successful team at Audley End House in Essex (English Heritage), cooking in front of the public, and using the dishes and techniques to explore the past and, before I managed to make everything all about the food, I also played Victoria herself, as well as various of her servants, at Osborne House and Kensington Palace.

Researching a character for public interpretation is a funny business. You have to inhabit the persona of someone enough for people to have conversations with you connected to the past, and sparked by your characterisation, but not so much that it’s scary (or that you seem like a weirdo). 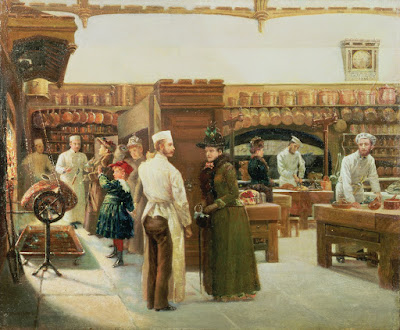 
Inevitably, you draw on elements of people’s lives that appeal to you, and with Victoria it was always the food. I kept coming back to the fact that before her marriage in 1840 she’d dieted herself down to 7 stone 2 (she was 5 ft 1), but by 1895 she had a 45 inch waist and was frankly enormous. Kensington Palace has gowns from various stages of her life on display, with mirrors behind them, so you can stand in front and compare yourself very directly to the shape of the person for whom they were made, and I’ve spent hours in quiet contemplation there. 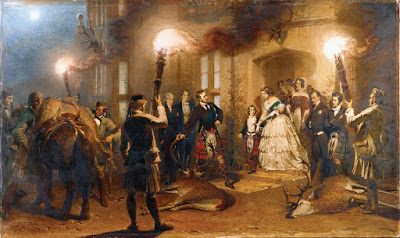 Inevitably, Victoria’s relationship with food was complicated and changed over time. I loved researching and writing the book, and there were genuine moments of absolute surprise – like the times when peahen featured in her supply ledgers, when I thought it’d gone out with the Tudors, or the sheer volume of food going into the palaces. 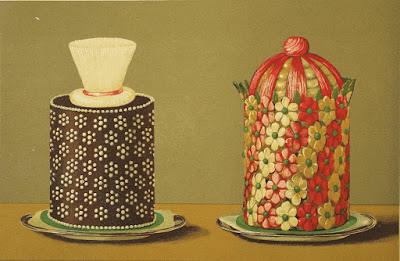 
I watched William IV die through the pages of his dining ledgers, and I saw Victoria recover after the birth of her children (chocolate sauce was involved). I also came to love Victorian food even more that I had done up to that point. So, for a taste of the Victorian high life, here’re a few of my favourites...

Ingredients required – One pound of flour, ten ounces of butter, half an ounce of German-yeast, four ounces of sugar, four whole eggs, and four yolks, a teaspoonful of salt, and a gill of cream. Mix the paste [in the manner described for Compiegne cake, excepting that this must be beaten] with the hand upon the slab until it presents an appearance of elasticity: the sponge should then be added, and after the whole has been well worked once more, the paste must be placed in long narrow tins [about 2 inches deep, and of about the same width, preparatory to placing the paste in the moulds: these should first be well uttered and floured inside (to prevent the paste from sticking), then the paste rolled out to their own lengths, and about one inch and a half thick, dropped into them] and set in a warm place to rise…when the paste has sufficiently risen, it must be gently turned out [on a baking sheet, previously spread with butter. Then] egged [all over with a soft paste brush,] and baked [of a bright, deep yellow colour. When done,] cut it up into slices [about a quarter of an inch thick] place them flat on a baking-sheet, and put them again in the oven to acquire a light-yellow colour on both sides.

These biscuits were beloved of Victoria as a teenager recovering from a serious illness in 1835. This recipe is from a book by Charles Elmé Francatelli, who was chief cook to her in 1840. He wrote several books, and this recipe appears in one aimed solidly at the middle classes. Interestingly it is not included in his high-end cookery book, which is in general more reflective of the kind of dishes which he would have been cooking at Windsor and Buckingham Palace.

I have halved the ingredients – it still makes quite a lot of biscuits, so by all means halve them again. You can buy ‘fresh’ yeast in blocks from the bakery counter at many supermarkets: it is the equivalent of the processed German-yeast mentioned here.

Crumble the yeast into about 2tbsp of tepid water, and mix to dissolve. Put 2oz of the flour into a bowl. Make a well in the centre, and add the yeast mixture. Sprinkle with a little flour from round the edges. Leave for about 10mn, at which point the yeast should be bubbling through the flour. Mix, adding a little more water if necessary, and form it into a loose and rather sticky ball. Cover with a damp teatowl or clingfilm, and leave in a warm place to double or triple in size. This is your sponge.

Meanwhile, mix the other ingredients well. Knead them, and, when the sponge has risen, add this in and mix everything thoroughly. Knead again. Francatelli now uses long, thin moulds as a way of shaping the dough which will be rather sticky and hard to handle. If you don’t have any, you can use plastic food containers, mini loaf tins, or half a kitchen roll inner tube, lined with greaseproof paper or clingfilm – whatever comes to hand is fine – just be aware that this will dictate the size of your final biscuits. Butter and flour whatever you are using, and put the dough in, to about 2/3 the height of your mould. Leave, covered with clingfilm of a damp cloth, for a couple of hours until it has risen and quite probably overflowed. Heat the oven to 180°c (170°c fan). Turn the dough out fast onto a greased baking sheet and bake for about 15-20mn. You can egg wash the whole thing for extra authenticity if you have a soft enough brush not to tear the rather delicate dough. (You can also just cook them in loaf tins which is easier, but it depends what you have in your kitchen).

Leave to cool slightly, and cut your cakes into thin slices. Egg wash them if you can be bothered, and spread on a greased baking sheet. Rebake for 10-15mn until they are golden brown. Store in an airtight container and eat with everything you can think of (especially orange jelly and beef tea).

Put a quarter of a pound of sifted flour into a basin, with four eggs, mix them together very smoothly, then add half a pint of milk or cream, and a little grated nutmeg, put a piece of butter in your pan, (it requires but a very little), and when quite hot put in two tablespoonfuls of the mixture, let spread all over the pan, place it upon the fire, and when coloured upon the one side toss it over, then turn it upon your cloth; proceed thus til they are all done, then spread apricot or other marmalade all over, and roll them up neatly, lay them upon a baking sheet, sift sugar all over, glaze nicely with the salamander, and serve upon a napkin; the above may be served without the marmalade, being then the common pancake.’

Alexis Soyer was the leading chef of his day, and was one of London’s most flamboyant culinary figures. Like Francatelli, he published cookery books aimed at the upper, middle and lower classes, and he also put his ideas into action, going out to the Crimea to work out whether the food had anything to do with the appalling death rate in the Scutari field hospital (it did). He subsequently invented a military stove which remained in use well into the latter half of the twentieth century, and was lauded as a hero by The Times. This recipe is from his middle class Cook’s Guide, which is written as letters from an experienced hostess to her protégé. It’s refreshingly odd, but the recipes are brilliant. Victoria’s children recalled making pancakes at the Swiss Cottage when they were learning to cook there in the 1850s.

Mix the eggs and flour until there are no lumps, then whisk in the cream or milk, adding a little grated nutmeg. Melt the butter in a pan, and pour in two ladles-full of batter, spreading it out across the pan. Flip or toss the pancake when it is just cooked on the top, and cook the bottom until it is brown. To be properly Victorian, spread each pancake with a thin layer of jam or marmalade, roll it up, and put it on a baking sheet. When the sheet is full of pancakes, sprinkle with icing sugar and put them under a grill to brown the sugar. Serve on a doily, stacked neatly in a pyramid.

1/4lb tongue-1/4lb parmesan, 1 oz of butter and a little cayenne, pound all together and pass it through a sieve. Cut the bread to fancy and then put the preparation between. Dip them in butter and parmesan and fry them a light brown.

One from my days at Audley End, this recipe is in a book kept by the cook there in 1881, Avis Crocombe. Avis was a trailblazer in her own way, one of a very small number of women cooking for the aristocracy. At the rank of earl of above, a woman cook was almost unheard of (Avis’s employer was a Baron, so rather lower down), and the preference of the titled was for men, preferably French men. That gender bias was also at work in the royal kitchens, where only around 15 of the 45 or so cooks were women. One of them, Jane Elgar, assistant to the confectionery, saw off five heads of department, all on £300 a year, while she remained on £40. However, she did manage to stay in post until her retirement, unlike Mary Timms, who died while still in service. Life in the kitchen was hard.

Cut the bread with a pastry cutter into fun shapes. Pound the tongue, parmesan, butter and cayenne in a mortar until it is pulverised (or use a blender, but the amounts are a bit small). Spread half the bread shapes with the paste, and press the other halves firmly on top. Melt the frying butter and dip the sandwiches in that, and then finely grated parmesan. Fry in yet more butter until crisp.

To drink, have a crack at either of the Queen’s favourite alcoholic tipples: claret mixed with whisky (I use Lochnagar and do 125ml wine and 25ml whisky), or whisky and soda. Seltzer water was widely regarded as a health drink, and whisky and soda, or whisky, soda and lemon squash, was therefore clearly an ideal way to start the day. One of Victoria’s granddaughters implored her mother, Victoria’s eldest daughter, to try it when she was thirsty…at 11am. 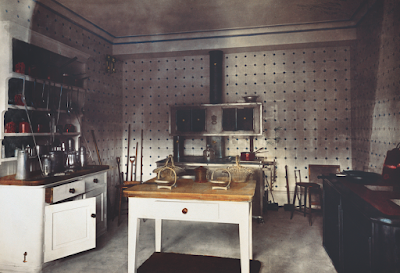