TAKING PHOTOGRAPHS OF THE DEAD 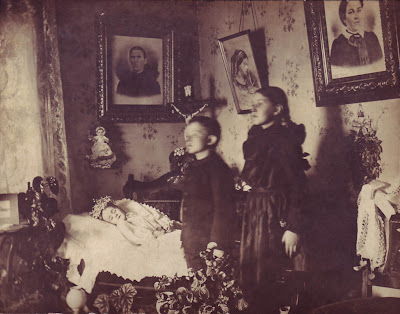 As gruesome as it may seem today, during the Victorian era there was a widely accepted trend for taking photographs of the deceased. Some pictures even showed the dead as if they were still living, being washed and clothed in their Sunday best, arranged in a naturalistic pose with their parents or their siblings.

Such a concept may seem disturbing to our modern sensibilities, but for many poorer families this was the one occasion when they could justify the cost of employing a professional photographer; with that single post-mortem image being the only visible record of what had once been a cherished life.

The VV will post one image here: a poignant scene in which two living children stand beside the bed in which their sister's body lies. The living appear to be brave and resigned, and yet they also look quite blurred, almost 'ghostly' in their forms, which has come about as the result of not remaining completely still during the time it would have taken for the film to be exposed.

Ironically, their sister is completely focussed and clear to see because, unlike the living her corpse remained immobile.