DAISY, DAISY, GIVE ME YOUR ANSWER DO... 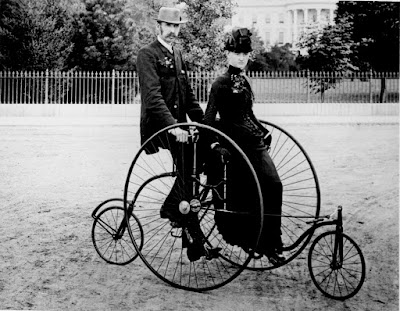 In 1892, by which time the bicycle had become an everyday sight in Victorian life, Henry Dacre composed a song that became immensely popular, both in the London music halls, and also in America.
The lyrics featured a tandem - a bicycle made for two - and the song was said to be based on the real-life Countess of Warwick, Frances Evelyn 'Daisy' Greville; a champion of women's rights, and also a mistress of the Prince of Wales.


Daisy Daisy,
Give me your answer do!
I'm half crazy,
All for the love of you!
It won't be a stylish marriage,
I can't afford a carriage,
But you'll look sweet on the seat
Of a bicycle built for two !


It is always somewhat surprising that, despite centuries of mankind using the wheel, it took so long for the bicycle mode of transport to be invented. And, like so many other events that we tend to take for granted today, the main refinements of development occurred during the Victorian era. 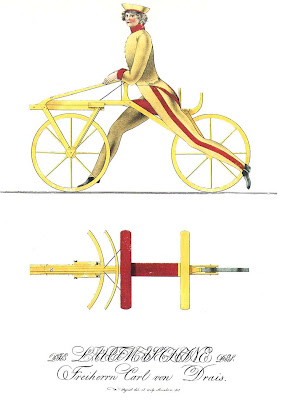 However the main innovation dates back to 1817 when the German Baron, Karl von Drais, created his 'Laufmaschine' - basically little more than a foot-propelled running machine. 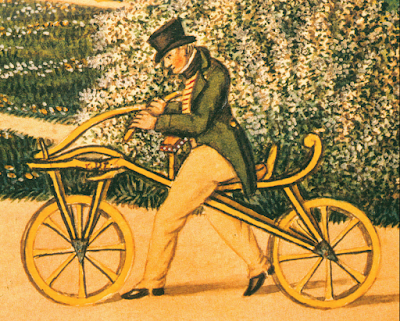 A year later, the English version (above) was patented by Denis Johnson, and became quite an overnight craze, though Keats was to call it 'the nothing of the day'. He was not the only one to initially ridicule the 'pedestrian curricle', also nick-named the hobby, or dandy horse due to the style of foppish young men who often took up the sport. And, as far as such prototypes were concerned, Keats was right to assume them a fad. The constant pushing along the ground quickly ruined the soles of boots, and riders who persisted in using the pavements or sideways were frequently stopped and fined two pounds. Quite an enormous amount at the time.

The Drais model did lead to future innovations, with the first pedal-operated machine believed to have been constructed in 1839 by the Scottish blacksmith, Kirkpatrick MacMillan.

Later, in 1861, the French carriage maker, Pierre Michaux invented his famous 'Velocipede'. This machine was nick-named the 'boneshaker' due to the terrible vibrations caused by riding on rough roads, with nothing beneath the saddle but wooden wheels bound in hoops of iron.

The new design was further developed to become known as the 'High Wheeler', the 'Ordinary' or the 'Penny Farthing', in which one wheel was a great deal larger as a way of attempting to reduce the trauma of the vibrations, as well as the risk of both wheels getting lodged in potholes in the road. 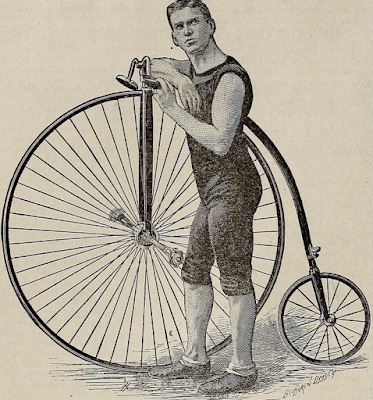 Although it must have taken some nerve and skill to remain in place on such a machine, they were extremely popular. They could travel fast, and races were often held. They also afforded a measure of freedom that enabled city dwellers to venture out into the countryside. Clubs were formed for like-minded enthusiasts, and even included church-goers who used this means of transport for spreading the word of Christ. 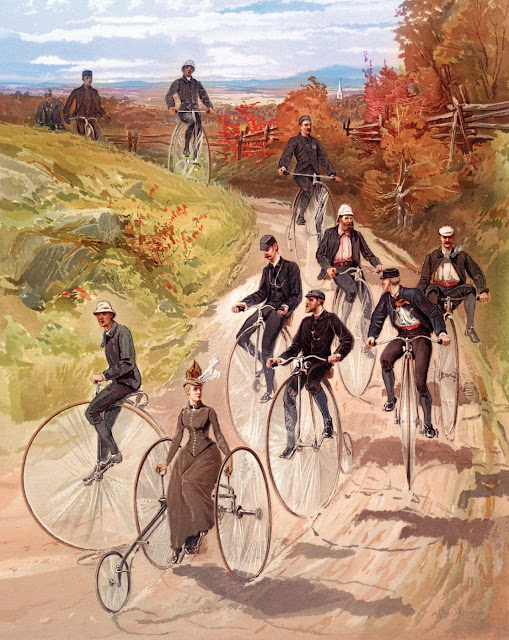 The turning point for general use came after 1890 when the 'safety bicycle' was produced, which included brakes and gears, but also equally-sized wheels cushioned on pneumatic tyres. This design has remained more or less constant and is the standard shape on which we wheel around today; though we rarely embark on the bicycles that are made for two. 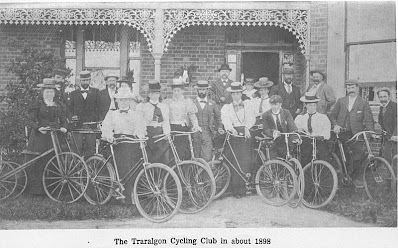