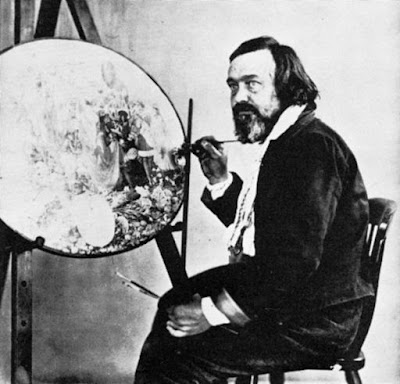 According to the Tate's biography Richard Dadds was 'an English painter of the Victorian era, noted for his depictions of fairies and other supernatural subjects. Orientalist scenes, and enigmatic genre scenes, rendered with obsessively minuscule detail. Most of the works for which he is best known were created while he was a patient in the Bethlem and Broadmoor hospitals.'
The son of a Chatham pharmacist, Dadd was the fourth of seven siblings, of whom at least three went on to suffer some degree of mental instability. However, in childhood and youth, Dadd presented with no such problems and was said to be mild-mannered and cheerful. Extremely talented in art, at only 17 he took up a place at the Royal Academy in London. There, he was regarded as one of his generation's most promising talents. He was also a founding member of ‘the Clique’ – a group of other artists in which he was a popular leader.

Dadd’s mental health began to suffer when he was in his twenties, when he left England with a patron, Sir Thomas Philipps, and travelled in Greece, Turkey, Syria and Egypt as expedition artist. It was in Egypt, where he became immersed in the country's culture and landscape, that Dadd first began to believe he'd been possessed by the spirit of the god Osiris. Still sane enough to be aware that something was very wrong, he began to make the journey back home to England alone. During this time he wrote to a friend, 'I have lain down at night with my imagination so full of vagaries that I have really and truly doubted my own sanity.' 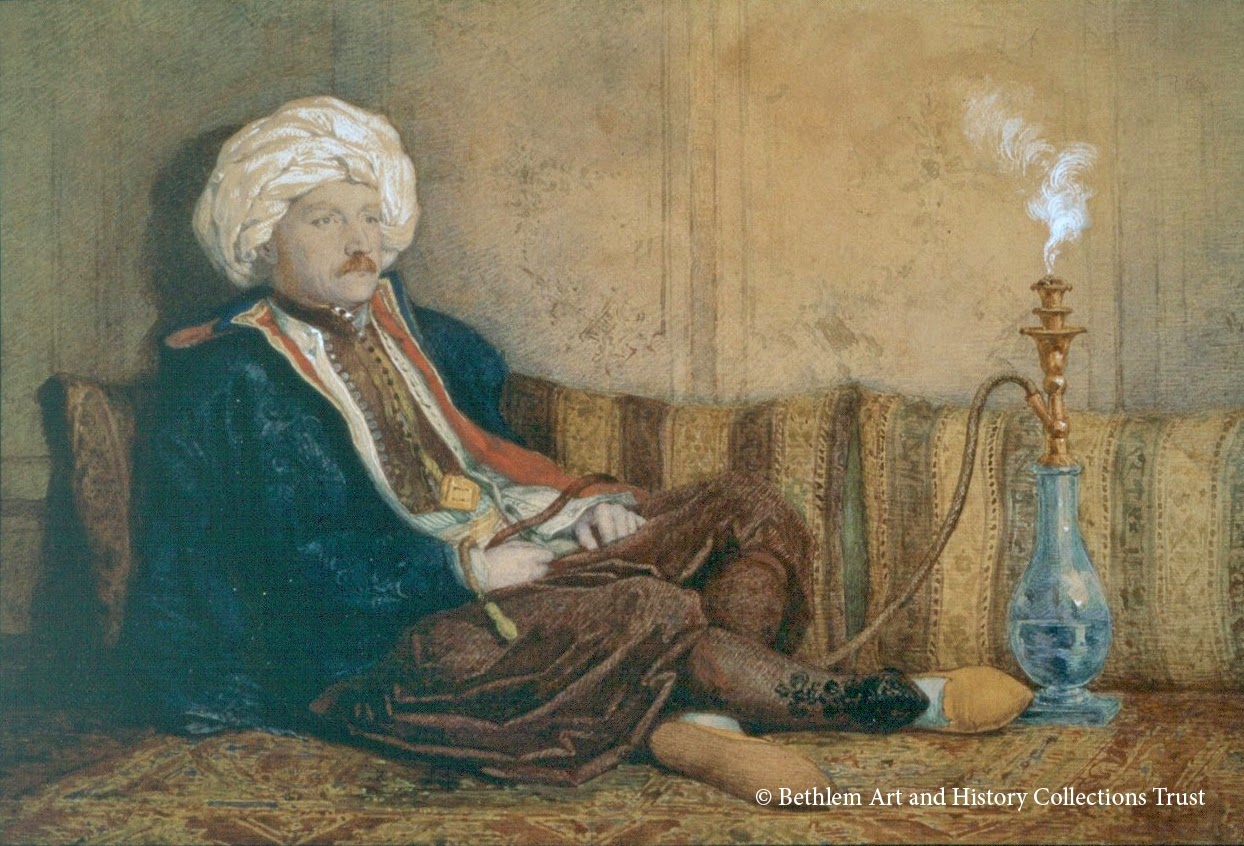 Once back in England he spent time recuperating in the family home. By all accounts he was often incoherent and developed strange eating habits; at once point only eating eggs and ale. A London doctor was consulted and gave his opinion that Dadds should be placed in an asylum. Sadly, his father relied on his own medical knowledge and insisted that all his son needed was a period of rest and quiet.This decision led to tragedy. After meeting his father in a local inn one night, when they left and walked in a local park, Dadd's stabbed his father and slashed his throat. He later insisted that Osiris had commanded him to kill his father because he was an imposter with black devils crawling all over him, especially in his saliva. 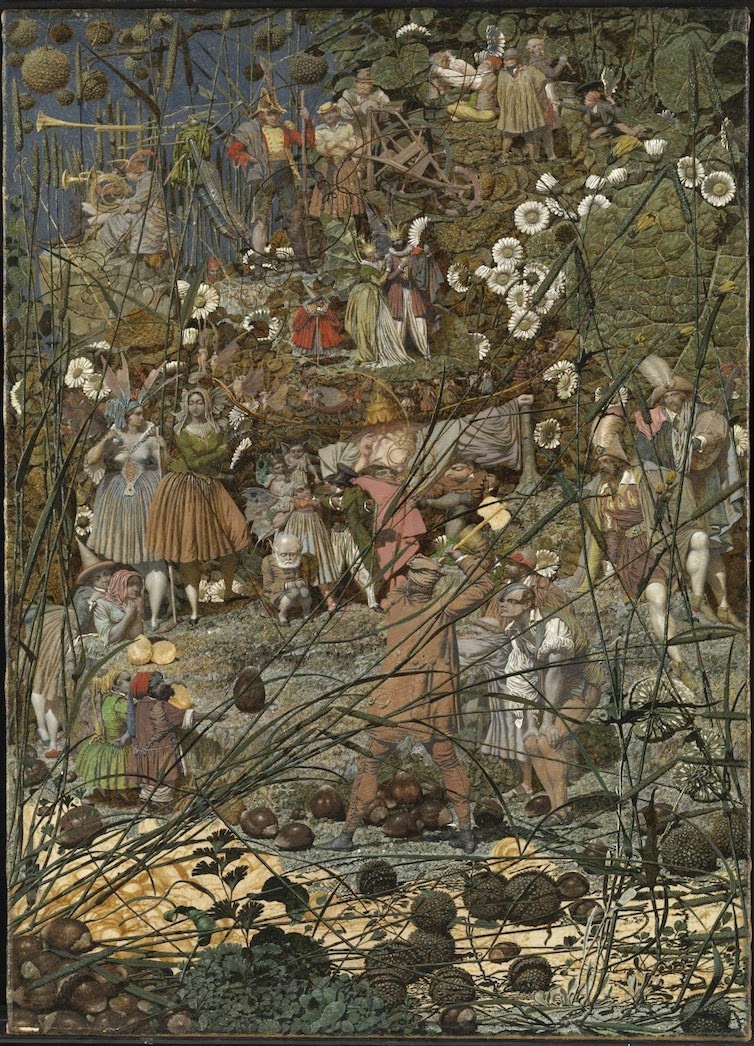 The Fairy Fellers Master-Stroke (painted between 1855 and 1864) ~ often said to be Dadd's most accomplished work.
Below is a short film presented on Youtube by The Tate
Dadd attempted to flee to France using a passport obtained some days earlier. On a train from Calais to Paris, he attacked a fellow passenger with a razor after being 'told do so by the stars'. At the time of his apprehension he was found to have a list on his person in which he'd written down the names of more intended victims, including the Emperor of Austria, Ferdinand I. There were also other people who he had drawn in portraits, with violent streaks of red pigment slashed across their throats.
After this, he was detained at the Clermont de L'Oise asylum at Fontainbleau for ten months. He was diagnosed with 'homicidal monomania' brought on by lack of sleep, trauma and heatstroke. When he was extradited and brought back to England to stand trial for his father's murder, one reporter mentioned his 'wildness of manner'. But rather than being hanged, he was sentenced to be confined at Bethlem Hospital in South London where he remained for the next twenty years.
In 1864, he was transferred to Broadmoor, a new state of the art hospital near Reading for the criminally insane. However, without modern drugs used to treat schizophrenia (and this term was not even in use until the late 1800s), Dadd's condition remained volatile and his religious delusions continued. Despite often attacking other patients, he was given a great deal of freedom by the forward-thinking doctors, even his own studio where he had access to knives. However, he did not kill again but was immersed in creating his paintings,  as well as backdrops for theatre productions put on by fellow inmates.
Dadd died from Tuberculosis at the age of 68, after which his work was more or less lost to the public until a revival of interest in the 1960s. In 1973 The Tate held the first major retrospective of his work. 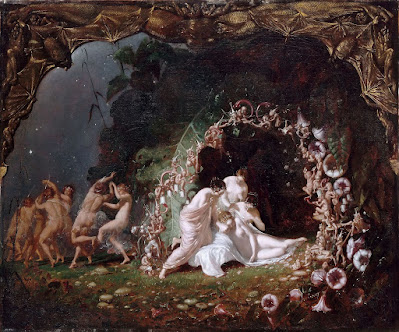 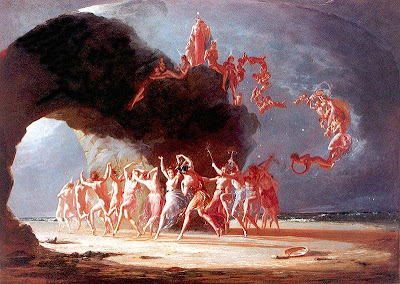 Come unto these Yellow Sands

The VV's favourite painting by Dadd is Come unto these Yellow Sands, inspired by Fairy Land iii, a poem by William Shakespeare. This is also the title of a radio play by Angela Carter based on Dadd's life. The VV has only been able to source this very short extract from the play - but there is always the hope that BBC Radio 4 might one day decide to repeat it.

COME unto these yellow sands,
And then take hands:
Court'sied when you have, and kiss'd,-
The wild waves whist,-
Foot it featly here and there:
And, sweet sprites, the burthen bear.
Hark,hark!
Bow, wow,
The watch-dogs bark:
Bow,wow.
Hark, hark! I hear
The strain of strutting chanticleer
Cry, Cock-a-diddle-dow!


If you wish to see paintings by Richard Dadd there are several on display at Tate Britain. 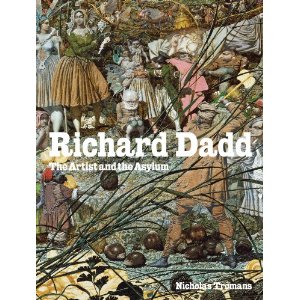 Richard Dadd: The Artist and the Asylum by Nicholas Tromans

There have also been exhibitions held at The Orleans House Gallery in Twickenham and the the gallery may still have information on any forthcoming events. Also, this article by A S Byatt is well worth a read.
Posted by Essie Fox at Monday, March 15, 2021