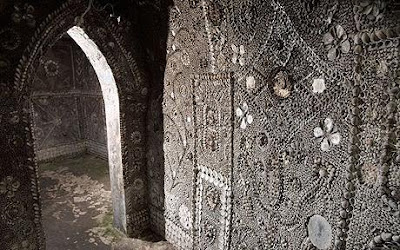 In 1835, while attempting to dig a duck pond, a man named James Newlove and his son Joshua discovered a peculiar hole in the ground. When Joshua crept down inside it, he discovered over 70 feet of winding passages, at the end of which he found the most wonderful subterranean shell grotto 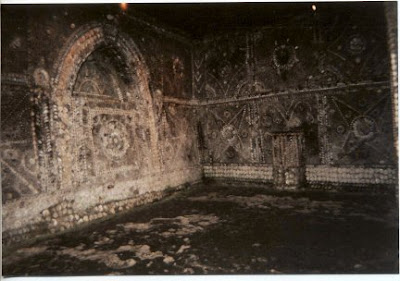 All of the walls were covered in an exquisite tapestry of shells, since found to have been stuck there with an adhesive that is based on gypsum and volcanic elements. Over four million cockle, whelk, mussel and oyster shells form various patterns of mosaics. There are images of the Tree of Life, phalluses, gods and goddesses. Some say they can see the horns or a ram, and a three-pointed star; also representations of the sun and the moon.
Mr Newlove soon decided to tap into the commercial potential of such a dramatic find. By 1837, the first fee-paying visitors arrived – and with them the debate commenced as to origin of the caves.

One idea was that it had once been an ancient pagan temple. Another, that it provided the home for a secret sect. Other people were entirely convinced that  it must be a Regency folly.

However, such follies were usually built on wealthy estates, whereas Mr Newlove’s grotto was built underneath common farmland. And then, there is also the fact that had the grotto been constructed during the 1700’s then surely some record or map would remain – not least with regard to the enormous industry involved in excavating the passages and creating the shell mosaics. And yet, there is no local knowledge regarding the grotto’s creation or existence. 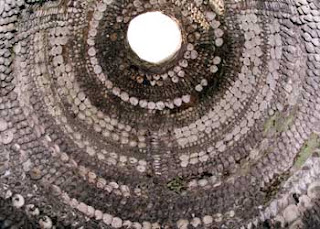 In 1999 English Heritage commissioned an investigation. The conclusion was that the grotto was unlikely to have been built during the Regency or Victorian period. Carbon dating was attempted, but failed to give a clear result owing to the build up of soot on the shells after oil lamps were used to illuminate the passages during Mr Newlove's tours.

Later, in 2001, Mick Twyman of the Margate Historical Society also attempted to unravel the enigma. He observed that just before the arrival of each spring equinox, the sun enters the underground realm through a dome with a circular opening that acts like a pinhole camera. As the seasons turn, the ball of light reflected on the temple walls grows larger and continues to move over certain ‘lines’ or bars in the shells, as if with a solar calendar. At midday on the summer solstice, the light resembles an egg that glows in the belly of a mosaic snake. At this point in time, it is reflected up into square apertures built above the grotto’s three distinct passages. The light is then bounced down to shine on what is presumed to be an altar built within the 'temple' chamber.

By the use of these phenomena and complex mathematical calculations Twyman was able to show that, allowing for the ‘creep’ of 1% in the Equinox angle that occurs every 72 years, the construction date for the grotto would have been around 1141 AD. 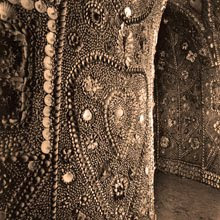 The following is an extract from an article Twyman wrote, linking the shell temple to the Knights Templar, claiming that it would have been used for Masonic rituals –

‘with a keystone over the entrance arch and its altar having everything required for Royal Arch Masonry...while mosaic design centres cleverly supply the basis for Masonic symbols, such as the Compass and Square, Star of David, Pentagram and Hardoian Tetrahedron, a symbol of great significance to the Templars and Cabbalists. ..There are also four panels which have above them the ancient God symbol of the three rays of heavenly light. Beneath one of these sits the Pleiades constellation, while the second has a Tree of Jesse surmounted by a tiny rose – another symbol of the virgin – and the third an ‘x’, which I believe to be the cross isolated from the banner of the Paschal Lamb, symbol of the Baptist.' 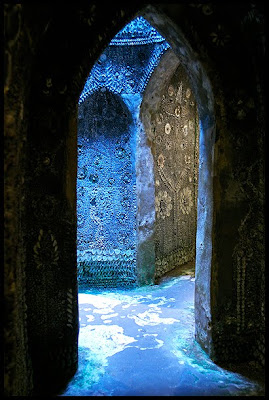 Whatever you think about the grotto and the mystery of its origins, the fascinating research goes on and. Meanwhile, the Grotto has been given a Grade 1 listed building status, and although it remains in private hands it can still be visited today.
More information can be found on the Grotto's official website.


For more posts on the Margate Shell Grotto, please see ...

ELIJAH'S MERMAID IN THE GROTTO...

RESTORERS OF THE MARGATE SHELL GROTTO ARE SHORTLISTED FOR THE ENGLISH HERITAGE ANGEL AWARDS...