SANTA CLAUS IS COMING TO TOWN... 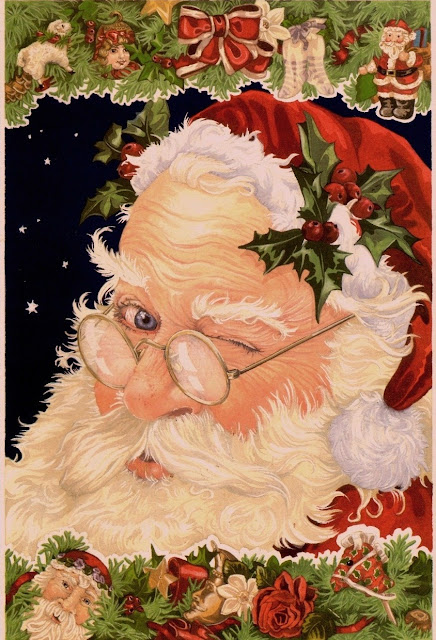 The VV has found her old box of watercolour paints and created this greetings card of Santa Claus to say thank you and to wish a very Happy Christmas to each and every one of you who follow The Virtual Victorian blog.

While painting she started to ponder on how odd it is that, before Queen Victoria came to throne in 1837 there were no commercial Christmas cards – that tradition only beginning in 1843, after the introduction of the Penny Post, when Sir Henry Cole had the bright idea of printing up thousands of images and selling them in his London shop, priced at just one shilling each.

What an industry that enterprise began! 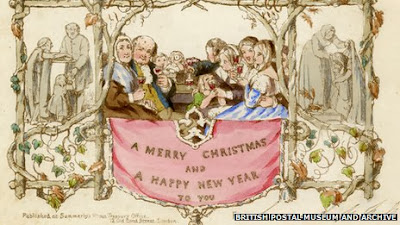 
But, as far as jolly santas go, very few people in England then would even so much as know his name. And yet, by 1870 most every child would have been aware of the magical sleigh drawn by reindeer, and a stocking full of precious gifts - if only an orange to signify a gift from Father Christmas.

The names Santa Claus, and Father Christmas have become somewhat interchangeable. But their origins are quite different.

Father Christmas, on whom Charles Dickens based his Christmas Present was derived from an old English festival when Sir Christmas, or Old Father Christmas, or Old Winter, was depicted as wearing green; a sign of fertility and the coming spring – which is why many homes were decorated with mistletoe, holly and ivy. He did not bring gifts or climb down the chimneys, but wandered instead from home to home feasting with the families and bringing good cheer to one and all - as described in the mediaeval carol printed below this illustration...

Illustration by John Leech from Dickens' A Christmas Carol

Imagine the goblets being raised with the cheering rendition of 'Goday!

The image of Christmas Present which we are more familiar with today – Santa Claus or Saint Nicholas – arrived in America in the seventeenth century when Dutch settlers imported their own Sinter Klass. And it was there in 1822 that Clement Clare Moore wrote a poem to delight his little children, which still has an enduring influence -

He was dressed all in fur from his head to his foot,
And his clothes were all tarnished with ashes and soot;
A bundle of toys he had flung on his back,
And he looked like a peddler just opening his sack.
His eyes how they twinkled! His dimpled how merry!
His cheeks were like roses, his nose like a cherry;
His droll little mouth was drawn up in a bow,
And the beard on his chin was as white as the snow.
The stump of a pipe he held tight in his teeth,
And the smoke it encircled his head like a wreath.
He had a broad face, and a little round belly
That shook when he laughed like a bowl fully of jelly.
He was chubby and plump, - a right jolly old elf –
And I laughed when I saw him, in spite of myself.

A Visit from Saint Nicholas (now more popularly known as The Night Before Christmas) described the old man’s appearance – the very image that every child has come to know and love today. It is so beautifully shown in this woodblock print designed by the artist Thomas Nast, who based the illustrations on his childhood in Germany. 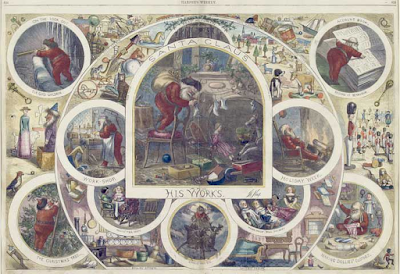 Santa and his works by Thomas Nast, published in Harper's Weekly Magazine in 1866