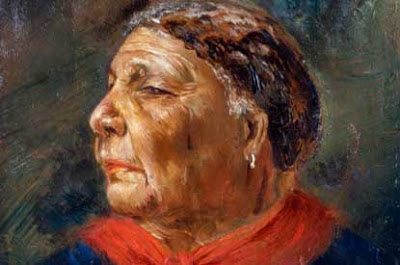 In 2005 a mixed-race woman from Jamaica named Mary Seacole, who had died in obscurity in London in 1881, unexpectedly became the subject of widespread media attention in the year of the bi-centenary of her probable birth (we are yet to find definitive proof of the precise date). Having already won an online vote in 2004 as the Greatest Black Briton, for her humanitarian work nursing the sick and wounded during the Crimean War, in early 2005 the National Portrait Gallery unveiled her lost portrait that I had had the good fortune to discover. By year’s end Mary Seacole had been catapulted to a position of pre-eminence in Britain as an inspirational black female role model from the 19th century. From the start, however, her meteoric rise to fame sparked equal amounts of admiration and controversy. 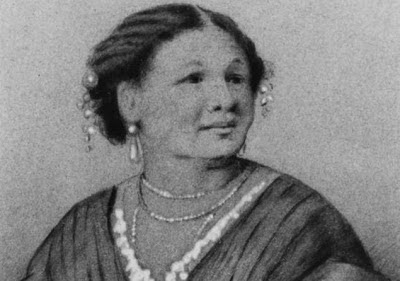 Women’s historians and Victorianists had in fact been aware of Mary Seacole ever since Falling Wall Press, a small feminist publisher in Bristol, reprinted Mary’s gloriously idiosyncratic memoirs Wonderful Adventures of Mrs Seacole in Many Lands in 1982. Barely half a dozen copies of the original cheap, cardboard-backed 1/6d edition had survived since first publication in 1857 but its republication made available a unique and valuable eye witness testimony of that terrible and futile conflict – the only account of war in the 19th century by a black woman – and one to equal the better-known memoir of the Crimean War by officer’s wife, Fanny Duberly.

But publication of Mary’s memoir also created problems of authenticity: the hagiographers, eager to rightfully promote her as an important black role model, proved a tad too accepting in their reading of the text. Mary’s book was written for a white, middle class Victorian audience and was, inevitably, economical with the truth about her own origins. She was the product of a common-law relationship between a Scottish soldier based in Kingston in the 1800s and a free, mixed-race woman, probably called Jane Grant (like many of the details in Mary’s story, we just don’t know for sure) but Mary of course drew a veil over this. She also failed to point out to her eminently shockable white Victorian readers that she herself married a white man (engaged in the West Indies sugar trade), and – as passing contemporary allusions and my own research later uncovered – that her liaison with a white English officer, Lieutenant General Thomas Bunbury while still married to the sickly Edwin Seacole, resulted in the birth of an illegitimate daughter, Sarah.

The total exclusion of Sarah, deliberately so, by her mother from The Wonderful Adventures (independent eye witnesses confirm her presence with Mary in the Crimea) is but one of several problems encountered in any attempt to verify Mary Seacole’s story; the public life of nurse, entrepreneur, cook and do-gooder is there for all to see, but the private life is almost entirely hidden from us. There is also the problem of Mary’s brush with British officialdom: she was of course refused, as a black woman, when she volunteered for Florence Nightingale’s official nursing contingent. But she was not the only black female applicant to be turned down – two or three other West Indian women also applied and were rejected, one of them on the grounds that her blackness ‘might frighten the patients’. Many in today’s vigorous pro-Seacole camp have been quick to accuse Florence Nightingale of rampant prejudice in not offering Mary a place at Scutari, but the fact is that by the time Mary Seacole got herself to the Black Sea under her own steam and at her own expense, she had already decided that her place was not nursing at Scutari, 300 miles away on the Bosphorus, but in the Crimea itself. Mary’s astonishing fearlessness, her will, tenacity and enterprise led her to take her own supplies out to the war zone, where she set up shop with the help of an elusive business partner, Thomas Day, (who never has any profile in Mary’s story – was there more to this relationship one wonders?) 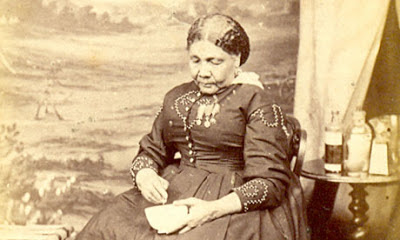 Contrary to some of the persisting mythology, Mary Seacole was not some kind of Victorian battlefield paramedic; she arrived in the Crimea after all the major battles were over. She never set up or ran her own hospital – the War Commissariat would never have allowed it, but she did run an informal daily clinic where those needing medical attention could go – be it for a dose of jollop for dystentery, to have a wound stitched or their frostbite treated – and where they would always find kindness, sympathy and the warm hearted welcome of a woman who offered a little piece of England in the midst of war. Such was the popularity of Mrs Seacole’s establishment and the tales of her kindnesses toward the sick and wounded that her name became legendary across the Crimea during 1855-6.

When Mary Seacole returned to Britain in July 1856 she found she was a household name, thanks to the letters home of soldieres who knew her in the Crimea and the reports of journalists such as W H Russell of The Times. One might equate the welcome she received, as a black woman, and the subsequent celebration of her achievements that followed, with the day another mixed-race British heroine – Kelly Holmes – came back from the Athens Olympics with two gold medals. For a brief while – a couple of years at most – Mary Seacole relished every single minute of her fame. Meanwhile, the woman perceived by some as her arch-enemy, Florence Nightingale, withdrew to her sickroom and refused all and any press attention. 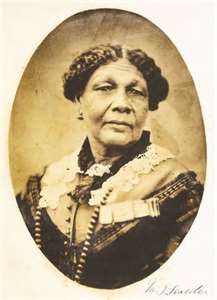 In my years talking about these two very different women in the context of their contributions during the Crimean War, I have often heard Mary Seacole alluded to as the ‘Black Florence Nightingale’. She wasn’t. She was her own woman; a proud Creole, loyal to Queen and Country who went to the Crimea to be of service to her ‘sons’ – the men of the British Army and Navy whom she had come to know in her years running a boarding house in Kingston. Mary Seacole was a patriot through and through, in many ways, more British than the British but unlike Nightingale she left no post-war legacy aside from her one slim volume of memoirs. We have thousands of surviving letters written by Florence Nightingale; at present there is only one known manuscript letter by Mary Seacole. After the Crimean War there were no statues erected to her, no streets, institutions, pubs or other buildings given her name; as the old soldiers who had known her in the Crimea died, so did the oral history of her exploits there.

It is of course only right and proper that Florence Nightingale, not only the founder of women’s nursing in Britain but also an important and influential social reformer thereafter, should have received the lion’s share of the accolades; but Mary Seacole has her own place in our history too. The mistake made by some of her followers has been to denigrate Nightingale’s achievements in an attempt to raise the profile of Mary’s; this is as misguided as are attempts to dismiss Seacole’s contribution in the Crimea as little more than ‘selling tea and buns to the troops’. The campaign for a statue to her in London has, since its inception in 2005, been dogged bycontroversy but it grows apace, as too has been the teaching of Mary Seacole’s story in our schools. The recent suggestion by Michael Gove that she be removed from the national curriculum was fiercely and promptly fought off; 35,000 people signed a petition to ensure that our children continue to learn about Mary Seacole, not necessarily as a pioneer and innovator – she wasn’t – but as a distinguished black woman who bucked every convention in mid-Victorian Britain, to raise the profile of her sex, her skills as a nurse and woman of business, and her Creole nationhood in a history that is still largely dominated by white males. 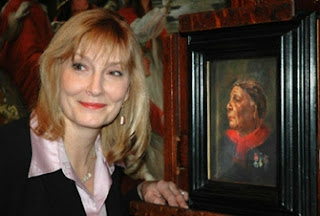 Helen Rappaport and the portrait of Mary Seacole exhibited at the National Portrait Gallery. 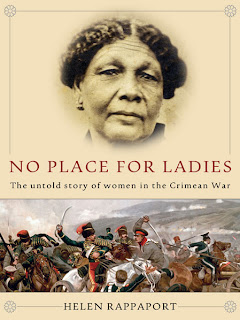 No Place for Ladies is by Helen Rappaport.