'HARROGATE IS THE QUEEREST PLACE' ... 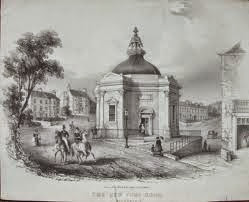 Harrogate is a beautiful and historic town situated in the West Riding of Yorkshire which owes much of its prosperity to the existence of a drinking well discovered in the 16th century by a certain William Slingsby. 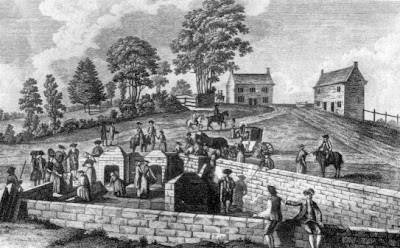 Mr Slingsby spread the word that the well water (which contains iron, sulphur and common salt) had significant healing properties. Over the next few centuries more and more visitors arrived to take advantage of that claim  - to cure anything from lumbago to gout.

However, it was in the Victorian era that the town reached great prosperity, becoming as well known as Bath for the fashionable society sets. By the end of the 1830’s over 10,000 people were visiting a year. After 1842, when a Royal Pump Room was built by Isaac Shutt (at a cost of £3000) to stand upon the original and somewhat less salubrious site of the sulphur well, those numbers continued to rise. It was to this central venue that waters from many sulphurous springs situated around the area was then literally pumped so as to provide sufficiently for those who wished to imbibe them. 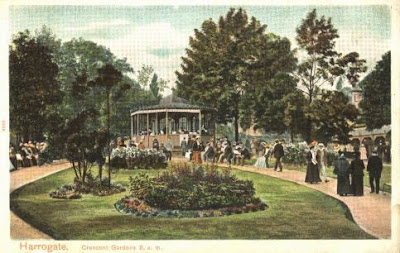 By 1860 the visitor numbers had trebled to 30,000 a year. By 1887, the tourists could also promenade in the newly created Valley Gardens which commemorated Queen Victoria’s Golden Jubilee – not to mention enjoying the various options now offered at the Pump Rooms. These included massages and Turkish baths, Vichy douches (whatever they were) and Electric shock therapies. And then, in 1900, the patients could follow up such exertions up with a visit to the newly built Opera House – now the site of the Harrogate Theatre. 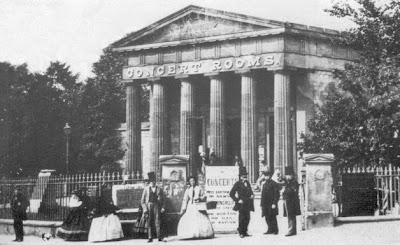 When Charles Dickens paid a visit, he wrote: ‘Harrogate is the queerest place with the strangest people in it, leading the oddest lives of dancing, newspaper reading and dining.’

Perhaps he had been subjected to the sort of prescribed daily routine that came to be common in later years for visitors attending the spa - when a ‘cure’ period of three weeks was advised for the maximum benefit to be gained!And according to these humorous cards, quite a transformation could be achieved - 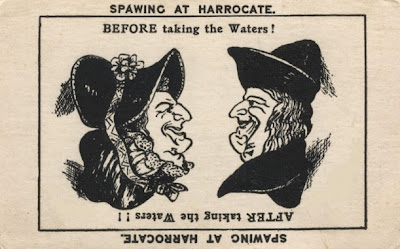 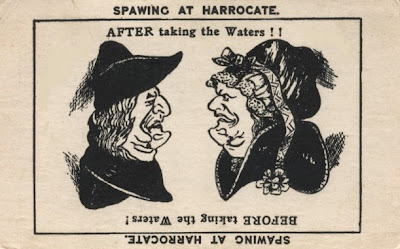 But, for the best results, these instructions were offered -

For some people it is advisable that they drive; either by omnibus, carriage, or bath chair but the walk home can be advantageous if it can be accomplished without undue fatigue. Care should be taken to avoid exertion. 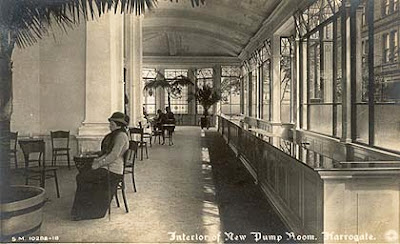 After a recent visit to Harrogate for the annual Theakstons Old Peculiar Crime Writing Festival, the VV suspects that not that much has changed; except that bedtime is a great deal later and although many liquids are imbibed they may not be as beneficial to health as those found at the spa. But the Pump Room can still be visited – and although it is now used as museum with no massages or douches of any kind, you can still taste the waters – should you be so inclined.
Posted by Essie Fox at Thursday, August 01, 2013