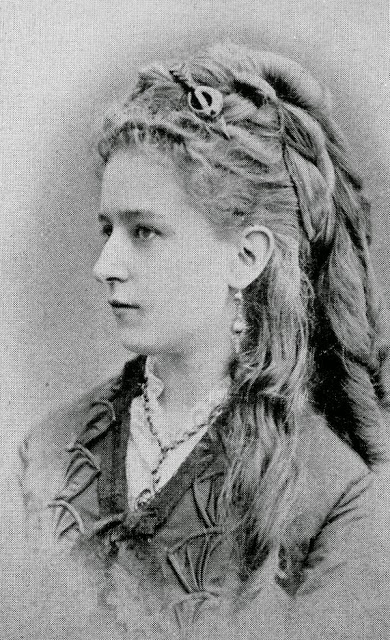 Emma Cecilia Thursby (1845-1931) was an American opera singer who began her musical career by playing the piano for Henry Ward Beecher’s Plymouth Brethren Church services. However, her talents were to spread to more secular entertainments too, soon sharing a platform with luminaries such as the famed author, Mark Twain ... who read poems on stage while Emma sang.

Emma often held popular salons and her musical act saw her travel to Europe – and also to meet with a Hindu monk whose teachings she started to follow. But, perhaps the most interesting thing about this woman’s history – for the VV, anyway – is the story of her beloved pet and travelling companion: a Mynah bird. 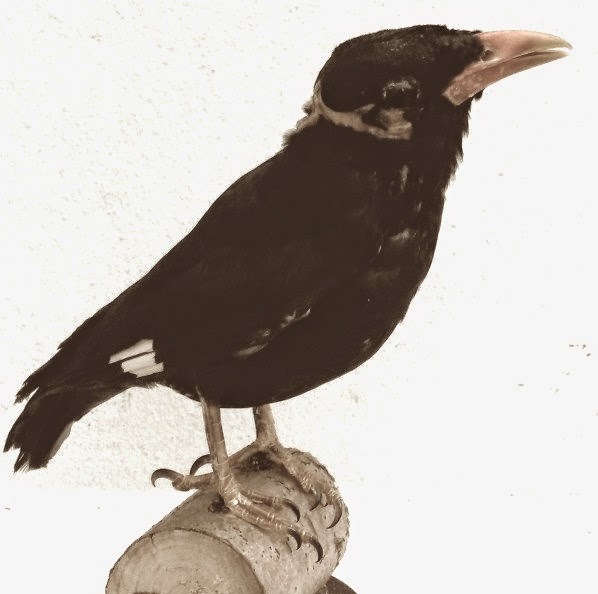 Even though the bird died in 1899 it remained in this world in a stuffed form, lovingly cherished when Emma died by the singer's sister, Ina. And it was Ina who was interviewed for this 1937 newspaper report in the Journal of the New York Bureau, which described the bird as -

"...kept on a perch festooned with moss beneath a glass bell in Miss Thursby’s parlour. Each morning her Japanese servant carefully dusts it off. When friends come to visit, Miss Thursby will talk for hours about its exploits. All her friends have heard all the stories many times, but they llike to hear her talk about the bird. Sometimes she lifts the glass bell and strokes the dead bird’s feathers.”

And what stories did she tell? Well perhaps she started off by relating how the bird had been given to her sister by Kaiser Wilhelm I; an enthusiastic admirer. He told how the bird had arrived at his court when brought there by the Chinese ambassador, who himself had found it in India.

So, a well travelled bird, but could that explain the fact that it spoke five languages and imitated perfectly a great many musical instruments, including the banjo? It was also a connesseur of wine – though port was the most favoured tipple – hopping about on the table top and dipping its beak into glasses at dinner.

Mynah – as the bird was simply known - was thought to be about sixteen years old when dying after falling ill at the end of an exhausting day spent at an annual pet show...after which, Miss Ina Thursby recalled -

“The last words he ever said were ‘au revoir.’ Dr Frank H. Miller, who was at one time a member of the staff of the Royal college in Berlin was called in to officiate at his autopsy. He said the bird’s brain was highly developed, containing a great deal of gray matter. We had a taxidemrmist mount him, and as a memorial my sister planted a weeping willow tree in Gramercy park...Mynah was valued at $10,000,” continued Miss Thursby as she toyed with two little rings on the stuffed bird’s left foot. “He grew world weary in his last years, and seemed bored with nearly everyboy but children and golden haired women. He was candid and not particularly polite to strangers. Once he mocked Miss Farrar while she was singing a difficult song and she became angry. She almost threw a book at him, and for a time they were not on good terms.

“He spoke Malay, Chinese, German, English and French. He played the piano with one foot. I am certain he was able to understand us, and we were able to carry on coherent conversations. For example, I once told someone he was born in India. He interrupted and said, ‘I’m an African.’ He repeated it in German. He called my sister ‘Mamma.’ We never caged him except when travelling. At home he had the run of the house. He went with us on many tours. During the day at home he would fly down to the park and play with the children, coming home for meals like a human.”

And the bird was not only loved by its owners. Mynah made a great impact on others too, as shown by this other news report from the Cambridge Chronicle, which is dated 1889.

“But I want to tell something of Miss Tbursby's wonderful Mynah bird, belonging to the starling family, as I heard it from her own lips. It is a very rare creature, and is said to be the only kind of bird that talks intelligently. It is a bird that has bad "advantages" of education and travel, having been pretty much around the world with its former master, who presented it to Miss Thursby. It speaks Chinese, French, German and English, rather forcible English, too, sometimes. Mynah, as his mistress calls him, answers questions that are put to him in a way that is positively uncanny, and he has a wierd, unearthly way of moaning "quacky, quacky," to himself. Upon one occasion this seemed strangely apropos, as Mynah struck up his refrain just as two physicians entered the room, one of them being the celebrated advocate of some new, though highly reputable method of treating certain forms of sickness. Fortunately both gentlemen had the grace and the sense of humor to appreciate the joke, no less than the others who heard it. One very remarkable thing about Mynah is his truly human laugh, which is never heard unless there is something to laugh at, which is more than can be said of some humans. When a joke is made in his presence, he is frequently the first to start the applause of laughter...and he joins with the greatest delight in all hilarity of his human friends. Mynah Is very fond of holding long conversations with himself, assuming first a masculine, then a feminine voice, asking and answering questions, scolding and defending himself against his own attacks. One of his chief amusements is singing with Miss Thursby, whom he always calls Mamma. First she sings a phrase, and he imitates it. But if "Mamma" continues too long without allowing Mynah his opportunity, he becomes deeply offended, ruffles his feathers, and utters a series a harsh squawks, drowning the sweet voice which be probably appreciates only as a means of amusement to himself. Not only does Mynah talk intelligently, but he appears to understand what is said to him, as for instance, when he calls: "Mamma, I want to get out!" he is quieted and satisfied upon being assured that he will be let out presently. Out of the city it is safe to let the bird roam where be will, so sure is he to return to his cage at night. As soon as a little child approaches his cage, Mynah begins a string of high pitched baby talk. He imitates wonderfully various Indian instruments, making a certain wiry twang in his throat like nothing else in the world. Not long ago two ladies recently returned from China, were calling upon Miss Thursby, when one of them was very much startled by hearing what she declared was a Chinaman chanting the dirge used in their ceremonial for the burial of the dead. And thus a light was shed upon a hitherto unaccountable practice of this most remarkable bird.”

A remarkable bird indeed! And, what's more, he really could play the piano - not simply imitate the sound. There are quite reputable reports of Emma asking Mynah to play - including one by Joseph Francis Rinn, an American magician and friend of Houdini who often attempted to debunk the fraudulent claims of spiritualists. But Rinn himself had to admit that the bird had remarkable unexplained gifts, as if he had a human soul. He held lucid conversations with Mynah - in more than one language too. He  saw Mynah hop onto a piano and perfectly pick his way over the keys to play the tune of  'Home Sweet Home.'

NB - The bird shown in this post is not the actual Mynah. Sadly, the VV has been unable to find any image of this remarkable creature.
Posted by Essie Fox at Sunday, October 19, 2014