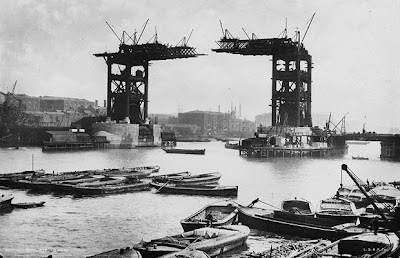 One thing the VV really liked about Guy Ritchie's film 'Sherlock Holmes' was the use of the city of London as an historical backdrop. We see the splendour of the Houses of Parliament and the sprawling filthy shipyards and docks where the sense of dynamic industry is exciting, not to say awe-inspiring. But, perhaps most spectacular are the film's climactic scenes which are set on the half-built Tower Bridge, a marvel of engineering which groans and sways above the Thames like some skeletal, living leviathon. 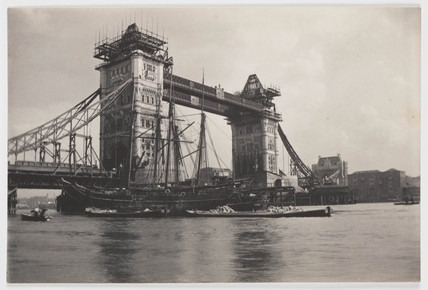 The bridge was built of necessity, for the levels of traffic coming in and out of London, particularly from the East End, had been increasing dramatically and London Bridge was no longer able to cope with the demand. 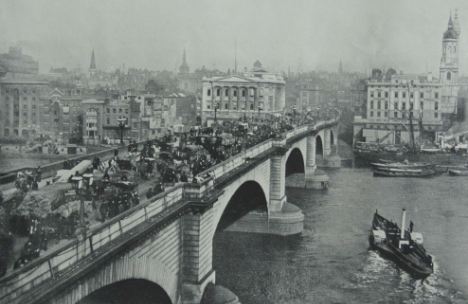 An view of congestion on London Bridge 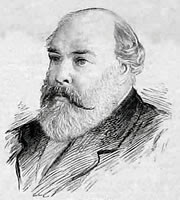 Tower Bridge was designed by the architect Horace Jones (see right), though he did not live to see his vision realised. It was John Wolfe Barry, a civil engineer, who oversaw the construction following his colleague's death.
The bridge was to be mediavel in appearance, with bascules raised by chains, just like a castle drawbridge. When lowered, carts and horses could cross. When raised, tall ships could sail beneath. The bridge was operated by hydraulics, with two pumping engines powered by steam. Below the steel-framed towers (which were clothed in stone to emulate the Tower of London) a tier had been sunk into the river bed, each one containing 70,000 tons of concrete. Amazingly - and those Victorian engineers really were amazing - the two sides could open and close in less than six minutes. And, all could be watched by pedestrians who crossed on suspended walkways above.
Tower Bridge was officially opened on June 30th 1894, when the Prince of Wales laid a foundation stone over a time capsule containing various papers and coins. The event was recorded by the artist, W. L. Wyllie and printed in the Graphic magazine. 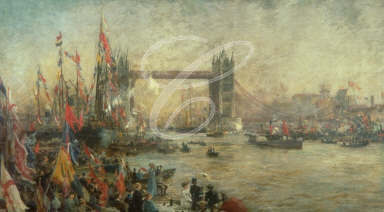 The Opening of Tower Bridge by William Lionel Wyllie
Image courtesy of The City of London.
The following year, the painting was exhibited at the Royal Academy. A reviewer for the Art Journal wrote:


‘The day was glorious, the sun hot enough to raise a tremulous golden haze over river and land, the breeze brisk enough to keep colour sparkling and the landscape clear. Mr Wyllie found here all that his heart could desire – the close-packed flotilla of shipping, the race of the mighty river tide, the avenue of unpaintably brilliant and varied flaunting bunting, which led up to the mighty bridge standing white midstream in the westering sunlight, and the great fleet of craft of all sizes and rigs, headed by the Admiralty yacht Irene, passing under its vast uplifted arms. Here was a subject for an historical painter, and in that sense he has conceived and executed it.’
More recently, the bridge is underwent vital restoration work. The architectural colour specialist, Patrick Baty of Papers and Paints carried out detailed research so that the structure can be repainted and maintained  in the most fitting manner. 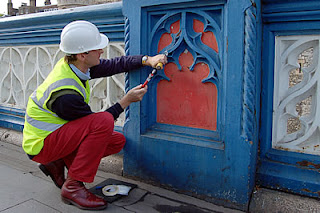 Patrick Baty sourcing paint for analysis
Should you wish to see more of Patrick in action, you can watch this clip shown on London Tonight.  Alternatively, you can read more of the process involved on the Tower Bridge information site. 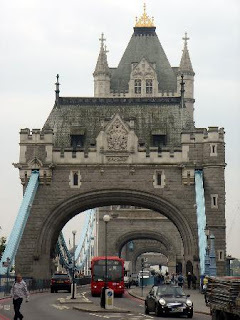 And, finally, if you want to visit Tower Bridge you can learn more at this site: The Tower Bridge Exhibition. 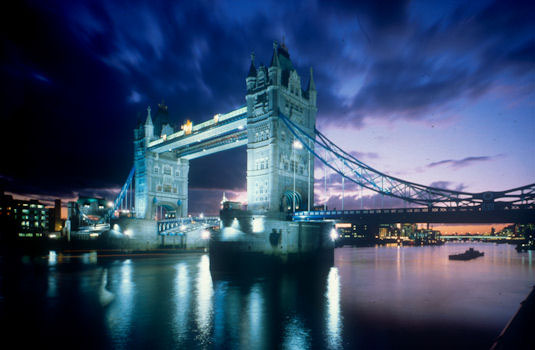