THE BRINGING OF HISTORY TO LIFE... 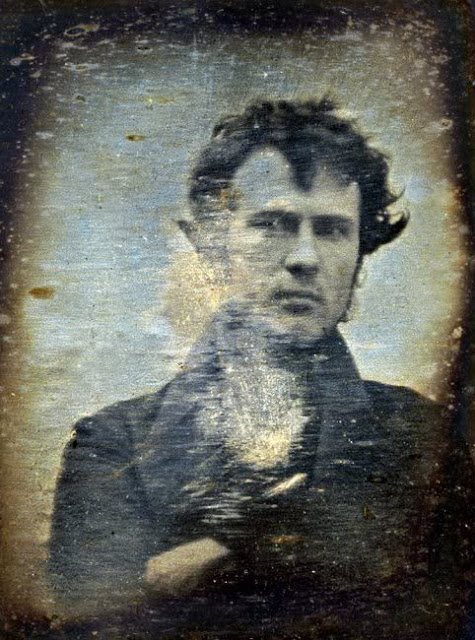 This is one of the earliest known photographs of a human. A self portrait taken in 1839, it shows a young Robert Cornelius (1809-1893) standing outside his family's lamp-making shop in Philadelphia.

Cornelius was an American of Dutch descent whose knowledge of metallurgical chemistry was to help in perfecting the process of silver-plating, then employed in the production of daguerreotypes.

It had previously been assumed that the time necessary for a photograph to be exposed was simply too long for portaiture to be considered. But, by making this striking image, Cornelius proved the concensus wrong and then went on to develop a chemical means of accelerating the process.

So - an extraordinary and historically important image - but the VV finds it startling for quite another reason.

This photograph was made well over 150 years ago, and yet Robert Cornelius looks as contemporary and 'immediate' as any young man you might happen to pass on the streets today. He might be in a fashion publicity shot, or some moody modern musician. But, the most poignant thing is that what you see is a real man - a man you could reach out and almost touch, a man you could talk to, or even desire.

This daguerreotype did not only change the way we see photography now. It works some kind of alchemy. One glance and it drags us back into the past. It is bringing history to life. 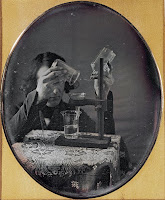 Robert Cornelius at work in 1843


The VV would like to thank Lucy Inglis, the creator of Georgian London for drawing her attention to this incredible photograph. And finally, in Lucy's own words - 'Cornelius isn't some styled dandy approving every brushstroke of a portrait or a miniature: he's just a bloke standing in the street trying out his new camera.'