LEWIS CARROLL: WHAT MAY HAVE INSPIRED HIS LITERARY GENIUS? 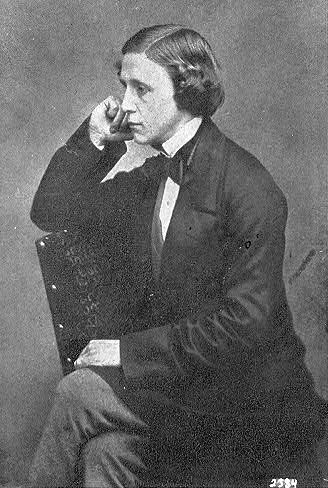 Charles Lutwidge Dodgson (1832-98) was a mathematics don at Oxford University who loved word play and puzzles as much as he did the study of Euclid. But then, Dodgson was a young man of many and diverse talents - and something of an enigma himself.

A skilful pioneer of photography, Dodgson was one of the first to create personal portraits - his work being much sought after by such fashionable luminaries as Alfred Lord Tennyson, Daniel Rossetti, John Millais, and Ellen Terry.

But, despite having many adult friends with whom he often visited art galleries and the theatre, the unmarried clergyman also enjoyed the less complicated friendships that he had with younger children - if not so much the company of the boisterous male pupils found when Dodgson was once employed as a school teacher.

In 1856, Dodgson was to write in his diary: "School...again noisy and troublesome...I have not yet acquired the arts of keeping order."

One can imagine the nervous young man being mocked by all the thoughtless boys, especially as he was said to have a tendency to stammer his words.

At Oxford he sought a quieter life, mingling with the families of fellow clerics and dons while applying himself to research and study. He published many mathematical textbooks. He wrote plays and political essays discussing matters such as voting theories in The Principles of Parliamentary Representation.

Also, while at Oxford, he often mingled socially with the children of his fellow academics. This led to some strong attachments being formed on the part of Dodgson, about which the spectre of doubt often arises regarding his motivation. However,  the VV is keen to stress that there is no actual evidence that he was ever influenced by anything more sinister than the fact that he was a sensitive man, perhaps overly fixated on his own innocent childhood years.

Such friendships inspired Dodgson to write his  'nonsense' poems, such as  Jabberwocky and The Hunting of the Snark - and, as most of us well know, his fantasy: Alice in Wonderland. 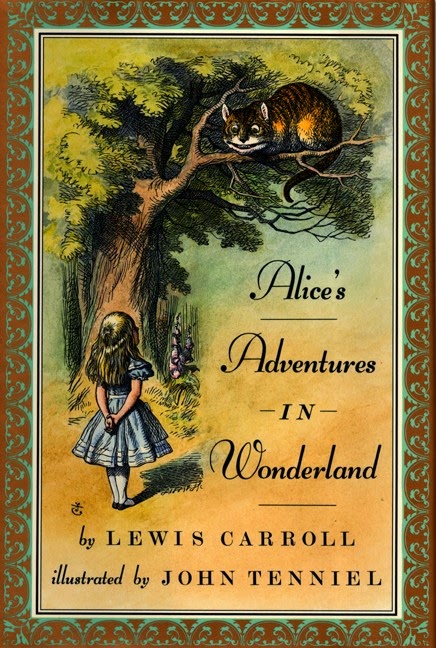 By 1865, the original handwritten version of Alice's Adventures Underground had been reworked and expanded from 15,000 - 27,500 words. It was published by Macmillan and Co under the pen name of Lewis Carroll, though the author's own illustrations, which were not without some merit, were replaced by those of John Tenniel, a far more accomplished artist who was already famous for his work with Punch magazine.

Tenniel and Dodgson had a somewhat strained relationship, with the artist regularly complaining that the author was meddlesome and demanding regarding the precision of his work. But then, Tenniel was not averse to making complaints himself. The first 50 books to be printed were swiftly withdrawn from sale when he claimed to be dissatisfied with the quality of reproduction. Those rejected copies were distributed to children's hospitals and institutions, of which 23 copies still survive. They are known as the '1865 Alice'.

The phenomenal success of Alice in Wonderland  was followed in 1871 by Alice through the Looking Glass. By then, even Queen Victoria had written personally to the author to say how much she enjoyed his work.

But, in addition to his fantasies, she and Dodgson also shared a mutual interest in the spirit world. (The widowed Queen was fascinated by cult of spiritualism - even engaging mediums or seances in the royal homes, in the hope of making contact with her deceased husband, Prince Albert.)

Dodgson was a founder member of the Society for Psychical Research and (despite some claims that he may have been unduly influenced in his faith by the frequent use of hallucinogens) he firmly believed that the human mind was able to perceive other realms in which our spirits might live on. He also had complete confidence that scientific developments would one day enable living men to 'speak' with the dead beyond 'the veil'.

In fact, much of his inspiration seems to have come from a far more down to earth source, with characters and themes in the Alice books reflecting people and places familiar to Dodgson's upbringing and subsequent academic life at Oxford University - all of which were so skilfully woven into a convincing, alternative 'whole'. 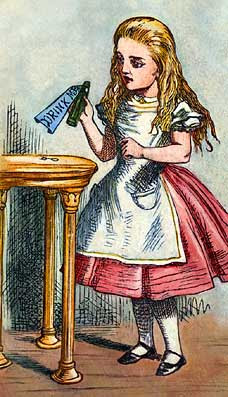 The character of Alice was based on Alice Liddell and has been discussed in detail in a previous post, THE REAL ALICE  IN WONDERLAND. 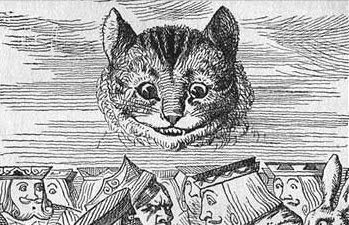 It has been suggested that the Cheshire Cat was inspired by ecclesiastical stone carvings, such as those at St Wilfred's church near Warrington where Dodgson's father was a rector. At a nearby mediavel church - St Christopher's at Pott Shrigley - a grinning cat can be seen carved into an outside wall. There is also a gargoyle at St Nicholas, Cranleigh, where Dodgson was once known to worship.


But, Dodgson was not the first to use the description of a 'grinning cat'. One was mentioned in 1795, in Pindar's Lyric Epistles - 'Lo, like a Cheshire cat our court will grin.'

The city of Chester, which once had cheese warehouses on the banks of the river Dee, was said to be full of cats which had ample hunting with mice and rats and were, therefore, very happy. In the Cheshire village of Daresbury, cheeses were moulded into animal shapes - one of which was a grinning cat. And then, the British Blue breed of cats are known for their 'smiling' expressions, and that breed was said to have originated in Cheshire. 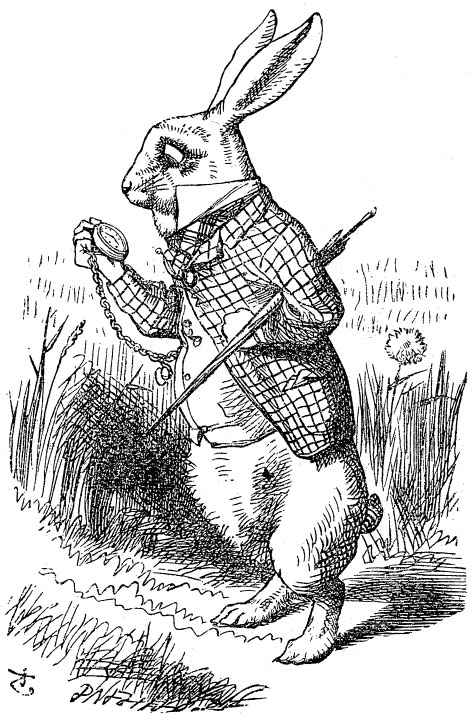 The White Rabbit is said to be based on Alice Liddell's father. As Dean of Christ's Church, Oxford, Henry Liddell was known for being late, often looking anxious while consulting the time on his fob watch.

A narrow twisting staircase behind Christ Church's main dining hall was called the rabbit hole. This is confidently said to be the place that inspired the dark tunnel through which Alice was to fall when following the rabbit into Wonderland. 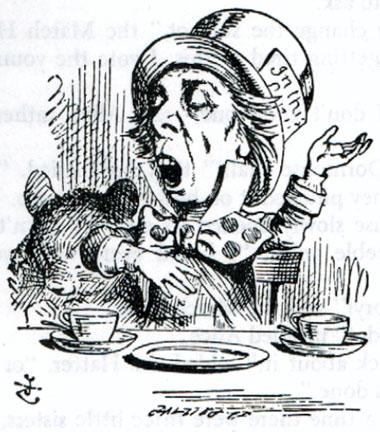 As far as the Hatter is concerned, the term 'as mad as a hatter' derives from a hazard of the trade in which mercury was often used in the processing of felt which was used in the lining of hats. Mercury poisoning could cause tremors and peculiar speech patterns, sometimes even hallucinations.

In Oxford, it was generally held that Tenniel's Hatter was a caricature of the local merchant, Theophilus Carter - a decidely eccentric man very rarely seen without his top hat. 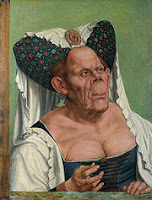 Tenniel surely based his depiction of the Duchess on this 16th century painting by Massys, an imagined portrait of the Countess Margarete Maultasch who lived in the 1300's - and was notoriously ugly! 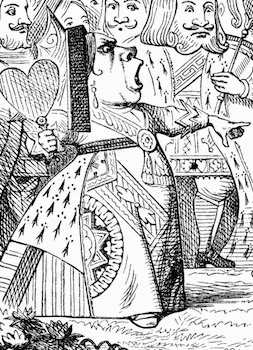 Some critics insist that the Queen of Hearts is based on Queen Victoria. But, Victoria enjoyed the Alice books. Would she really have been so amused by such an unpleasant caricature, or was she simply much too vain to notice the resemblance?