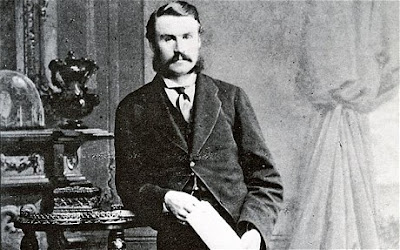 Sir William Schwenck Gilbert 18 November 1836 – 29 May 1911
One hundred years ago today W S Gilbert died.
Born the son of naval surgeon who went on to write novels and short stories, Gilbert himself originally trained to be part of the legal profession. But it seemed he was not suited to the life of a barrister, and with fewer and fewer clients, and when forced to address a dwindling income he also began to write, particularly for the theatre in which he was tirelessly enthusiastic, creating operatic burlesques, plays and libretti, stories, song lyrics, pantomime scripts - even designing sets and stage costumes, or providing his own illustrations for Bab Ballads; a collection of comical verse. (Bab was his nickname as a child). 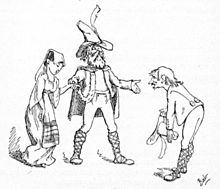 An illustration from Bab Ballads

But what really changed his life and guaranteed its future fame occurred in 1871 when Gilbert was asked to write a piece called Thespis, with music provided by Arthur Sullivan, already a popular young composer. The score was never published and the music has now been lost, but that first endeavour came to the notice of the producer Richard D’Oyly Carte, after which the two men were commissioned to create many more such collaborations which went on to be known as the Savoy Operas, after the theatre in which they were housed.

Performance of The Pirates of Penzanze
Beginning with Trial by Jury, they followed with other successes such as H M S Pinafore , The Pirates of Penzance and The Mikado – all of which proved to be in great demand as respectable Victorian entertainment – with a frisson of irreverent wit beneath, but neverless deemed suitable for the amusement of young and old alike. 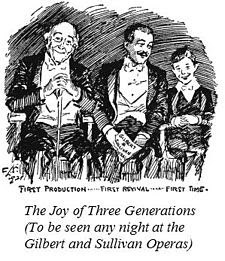 There were many memorable songs with lines such as – ‘A policeman’s lot is not a happy one’, or ‘Short, sharp shock’, or  ‘What never? Well, hardly ever!’ or ‘Let the punishment fit the crime’ – all of which are still frequently used today. But, contrary to what might be imagined, although their working partnership went on for more than twenty years, the relationship between Gilbert and Sullivan was not a happy one. Gilbert would write the libretti and then simply sent the words off for his partner, and as the years passed many frictions arose. Gilbert’s ‘topsy-turvy’ dramas where accepted social order was turned upon its head, with many public figures being lampooned and parodied, often clashed with Sullivan’s desire to be friends with the upper classes and rich.So, towards the end of their careers, by which time both men had been knighted, their paths diverged, more often than not working alone, and often on serious projects. 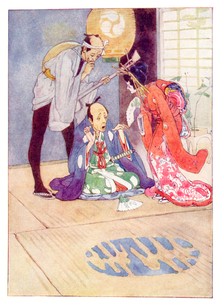 From The Mikado, a children's book by W S Gilbert
with illustrations by Alice B Woodward, published posthumously in 1921
Gilbert built The Garrick Theatre, and when he wrote The Hooligan, the play was deemed to be so gruesome that women in the audience fainted. But, he also revisited his previous successes by writing children’s books based on the stories of HMS Pinafore and The Mikado - for despite having a reputation for sometimes being 'prickly', Gilbert was known to love children, and he could be extraordinarily kind – often paying for cabs for his theatre staff if they worked too late or the weather was bad, and setting up funds for friends who had fallen into penury.

The Gilberts
Personally, he was also known to be very fond of the opposite sex. In 1867 he married Lucy Agnes Turner or ‘Kitty’, a woman eleven years his junior, and though never having children of their own, later on they did unofficially adopt an actress called Nancy McIntosh who’d been cast in one of Gilbert's plays, and who later shared their Harrow home which went by the name of Grim’s Dyke. 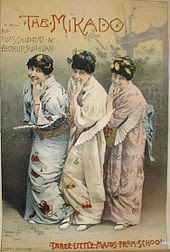 That name seems somewhat poignant now as, at the age of 75, Gilbert was to meet his death when suffering a heart attack while going to the aid of two little maids who'd been swimming in his lake – or so the official story goes. But, as the VV mentioned previously, Gilbert was fond of his female friends - and that fondness persisted until his death. Let us hope that he went with a smile on his face, which seems to be only fitting and fair considering the legacy he left behind; all those works that continue to make us smile.

Gilbert by the cartoonist Spy
Posted by Essie Fox at Sunday, May 29, 2011

Email ThisBlogThis!Share to TwitterShare to FacebookShare to Pinterest
Labels: W.S.GILBERT. GILBERT AND SULLIVAN.