EDWARD WHYMPER AND HIS TRAGIC SCRAMBLES AMONGST THE ALPS... 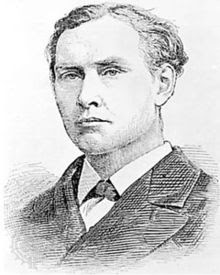 Mr VV has just returned from one of his brave expeditions, foraging around in foreign climes, this time in the Pennine Alps between Switzerland and Italy where he followed in the footsteps of the famous English climber and explorer, Edward Whymper.

Whymper’s obsession with the Alps began when he was twenty, when in his role as an illustrator he was commissioned to produce some drawings of Alpine scenes. The area was already extremely popular with members of the London Alpine Club, to which the young Whymper belonged, enjoying the Victorian 'Golden Age of Alpinism'. 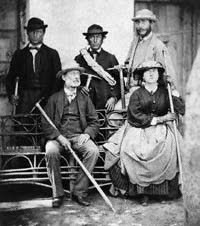 Some members of the Alpine Club

This hardy group combined scientific pursuits with the sport of climbing and at the age of twenty-five, Whymper was to conquer the one remaining ‘virgin’ alp.

The Matterhorn (German name) or Mount Cervino (Italian name) is 4,477.54 metres high, and being shaped like a pyramid it has four steep faces aligned with each of the compass points. It is surrounded by glaciers and overlooks the town of Zermatt – above which it looms, a great obelisk, daunting, challenging. 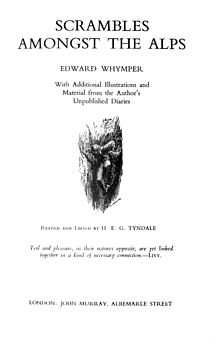 The ‘success’ of Whymper's ascent was described in his book, Scrambles amongst the Alps which was published in 1871. It tells how four of the seven-strong team were to die when making their descent which resulted in a controversy as to whether the rope connecting all men had actually snapped or been cut. Certainly the event haunted Whymper, who wrote –

"Every night, do you understand, I see my comrades of the Matterhorn slipping on their backs, their arms outstretched, one after the other, in perfect order at equal distances—Croz the guide, first, then Hadow, then Hudson, and lastly Douglas. Yes, I shall always see them…"

Since then, and 1995, 500 climbers have lost their lives while attempting to conquer the Matterhorn. 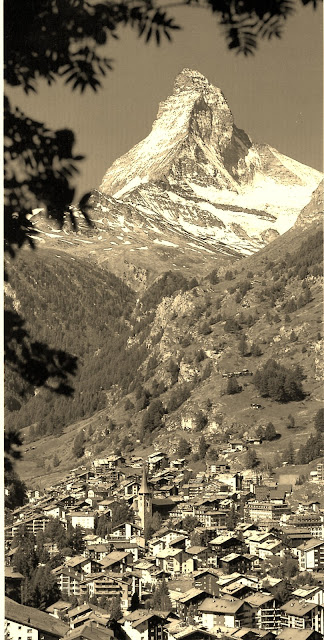 The town of Zermatt has a long history as a centre of climbing. There is a graveyard right in the centre that is packed with dead climbers, many of their fates found on the Matterhorn – the mountain that dominates the town; a huge single lump of granite with clouds like smoke streaming from the summit.

We spent many hours on glaciers. Each differed in challenge from the next, according to the depth of lying snow (from none to hip high), the time of the day and therefore its exposure to sun, whether it was virgin or pre trodden, and most significantly the degree of cracking (or crevasses) that are hidden below the surface, awaiting unwary victims. Ropes are essential. Below are moraines. Acres of demolition sites where lies the rubble the glacier has ground from the mountain. The scale of the destruction that each of these historic ice monsters has created is amazing and daunting.  Each block, rock and pebble has to be negotiated; mile after mile whether ascending or descending, the effect is physically destructive and spirit-sapping.

Above the glaciers are the mountains, ranging from steep, to very steep, to ‘you must be joking’. Some parts are dyed orange by the presence of iron. Others are jet black. Dotted around the mountains are the cabins which at best resemble medieval redouts; redouts with bunk beds, fruit tea and shelter at the end of a hard day's climb.  Each is located to avoid the worst possible effects of avalanches. In general, this means to one side of a coll and up, where the ‘up’ means yet another stiff climb at the end of each exhausting day.

At the heart of our expedition were three such castles: the cabins Dix, Vignettes, and Bertol, each separated by a challenging combination of rocks, glaciers, and distance. But Bertol is the Prince of Cabins. One of the oldest, it stands at the top of a ridge, a rock that looks like a spire. Accessible only via fixed and enormously long ladders, the structure is set apart from the steep slopes of snow that fall away on three sides. All around are panoramic views of the mountains - views of the routes we had taken, and the one we would undertake the next day. The brooding giant Matterhorn was looming in the distance. But no individual mountain made that view so spectacular. Rather it was the scale of the whole collection. Mountains that would be stars in any normal European range are reduced to bit players here. Seen together, they take the breath away.

So, it was surprising that after such an experience, the last day of the expedition should produce the stand out moment. Awaking at 4am and bidding farewell to Bertol we descended the ladder to the snow. It was still dark and the cool of the night helped reinforce the snow's crust below crampon-clad boots as we marched over and up the glacier for two and a half hours, at the gruelling end of which we reached the crest of the coll. And there was the Matterhorn towering above us, bathed in the early morning sun. 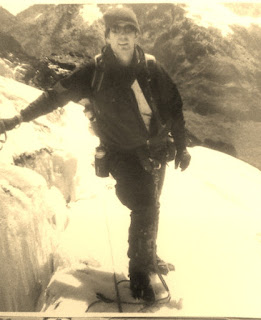 Mr VV  aka Chris Fox - and his crampons

A single block of granite it is. But what a block nature has crafted. A monster whose presence is lauded by the supporting cast of mountains, valleys and glaciers. And everywhere a stunning clear light that cast curving, swooping shadows. The white of the snow. The black of the mountains. Add to that a sky of the purest, deepest blue, and far below a haze of cloud, hovering over the valley, some 2000m above Zermatt. 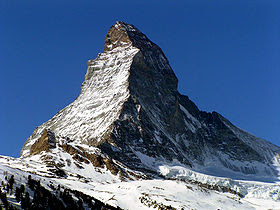