'GENERAL ADOPTION OF THE ROLLING SKATE'...

A few weeks ago the VV went on a visit to the Wellcome Institute on the Euston Road where the current free exhibition, SUPERHUMAN provides a thought-provoking display of the many technological means (both real and imaginary) by which the appearance or capability of the human form has been, or may yet be, enhanced. 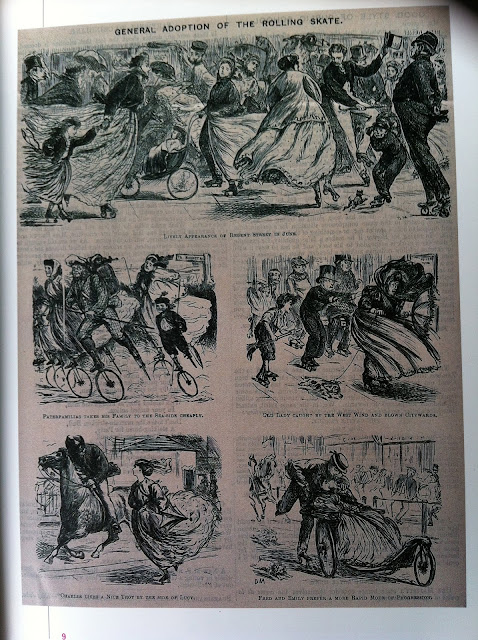 One display from the Victorian age was an 1866 illustration by George Du Maurier titled: 'GENERAL ADOPTION OF THE ROLLING SKATE'. Now belonging to the Wellcome Library, this was originally printed in Punch magazine, providing a comical series of cartoons which exhibited various instances in which roller skates might be observed.

The first known pair of roller skates were created by the Belgian, John Joseph Merlin, in 1759 – and what a demonstration he gave when, in 1860, he burst through the doors of a London ballroom whilst skating, and playing a violin, after which he very nearly died when being unable to stop the wheels and crashing into a mirror.  Sadly the violin did not survive. 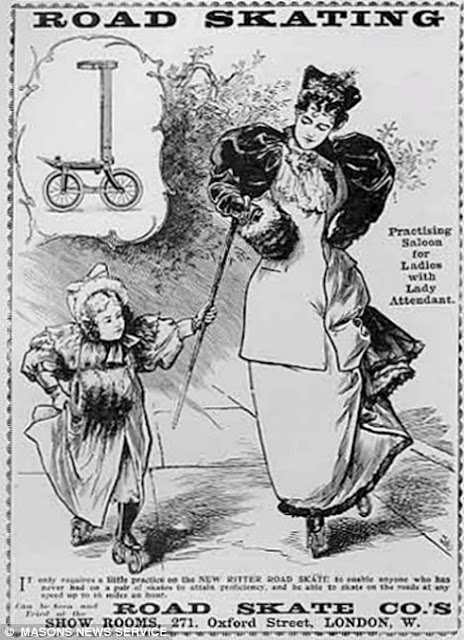 In England in 1859, The Woodward skate was invented – and this had wheels of vulcanised rubber which aided the traction of the skates. With two wheels placed in the middle of the skate and another one at either end, it was also a little easier to control the direction of the 'roll'. 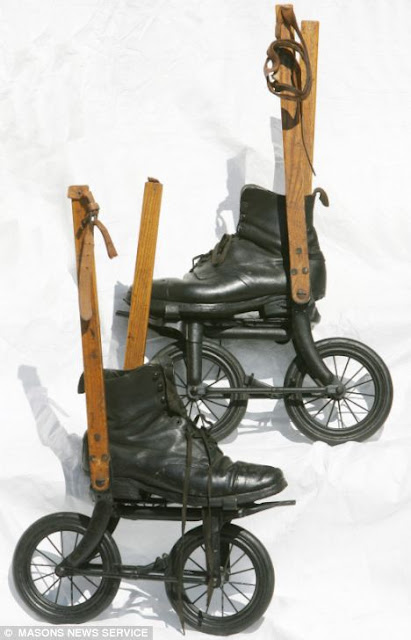 In due course, rolling wheels were so popular that towards the end of the century they were sold from a shop on Oxford Street, opened up by another inventer, the Swiss born Mr Ritter. Ritter’s oldest surviving boots which date back to the 1920’s show a precarious looking contraption that must have required a degree of skill - not to mention bravery - when heading out in the open air. However, there was a time when many London businessmen could be seen whizzing along the capital’s roads whilst heading to and fro from work. And such was the increasing craze for roller skating as a family leisure pursuit that The Grand Hall at Olympia was opened up; the biggest roller rink ever built, measuring 68,000 square feet – although it had closed within a year.

In New York, many maple-floored rinks were constructed where men, women and children could take part in roller racing, in ‘fancy’ skating or dancing events – and indeed, so popular was the ‘sport’ that Harper’s Weekly Magazine printed a spoof gravestone inscription: a rather wry tribute intended for a devoted skater who had passed on –

Our Jane has climbed the golden stair
And passed the jasper gates;
Henceforth she will have wings to wear,
Instead of roller skates.