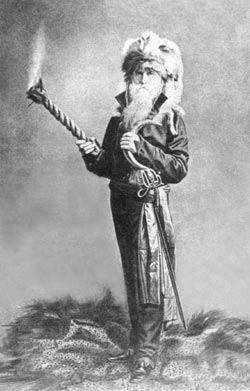 Doctor William Price was a scholar and surgeon who gained fame at the age of 84 when cremating his dead baby son on the side of a Welsh mountain. 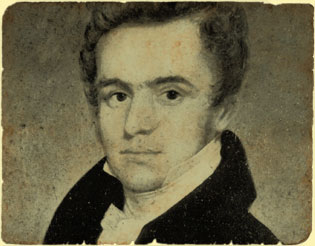 A charismatic and charming young man, Price socialised as easily with the Welsh working class people among whom he grew up, as he did with the wealthier London elite met while he studied medicine. Being a talented student, at the age of only 21 he became a member of the Royal College of Surgeons.

When returning home to work in Wales be became very much involved in the Chartist movement, and also did a great deal to improve the health of the local workers - being very much against smoking, and keen on natural medicines, with a healthy diet (vegetarian here), and plenty of open air exercise. Such pioneering practice in a social healthcare system went on to have great influence on the views of Aneurin Bevan.

One of the earliest feminists, Price believed in Free Love in relationships and the abolition of marriage. He was also very much immersed in alternative religious faiths - studying Hinduism, Greek Mythology, as well as Egyptology, not forgetting the cult of Druidism that was very popular indeed in the Welsh Victorian era.


At this time there was a rising fear that the country may lose its identity and, inspired by the work and faith of the Druid, Iolo Morganwg, Price hoped to encourage interest in the Welsh culture, language and history. (This was also the era when Lady Charlotte Guest was translating The Mabinogion to English, with competitive eisteddfods run to encourage the arts and the spoken word.)

Price believed the land’s many standing stones were places of spiritual worship and hoped to create his own ‘temple’ at the summit of a mountain overlooking the town of Pontypridd. When attempts to raise £10,000 to build a great museum failed, he refused to doubt his mission, especially after making a visit to the Louvre in Paris - after having been forced to flee to France when involvement with the Chartists’ rioting placed him at risk of imprisonment.

At the Louvre he was said to have viewed a 2,000 year old Greek Stone, and believed that he could understand every one of its engravings, claiming that the stone had ‘spoken’ to him of his future as a ‘bard of the moon’, whose first-born son would then become the Messiah of the Druid faith.

Back in Wales again, from around the age of 40, Pryce became yet more unconventional in his dress as well as his beliefs. Growing his hair down to his shoulders and also wearing a long black beard, he dressed in flamboyant outfits, often coloured emerald green. He also wore a crown upon his head that was made from the body of a fox. 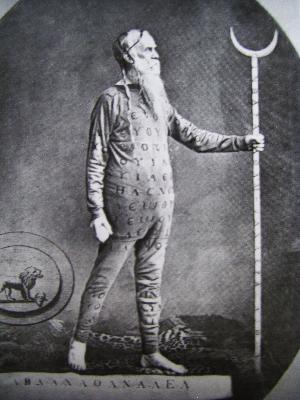 At the age of 71, having fathered three daughters, but still no son, he went on to practice medicine in the medieval hilltop market town of Llantrisant. It was there, at the age of 83 that he met a young woman, Gwenllian Llewellyn, almost 60 years his junior, and who - despite all previous statements of not agreeing with marriage - he then went on to marry in a pagan open air ceremony, at which three women friends appeared in costume as The Three Graces.

The longed for son was born to them on August 8, 1883 and was named as Lesu Grist Price (the Welsh version of Jesus Christ). When that child then sadly died from a convulsion at only 5 months old, his father attempted to perform a cremation on East Carlen hill.

No doubt he had been influenced by the Hindu cremation ceremonies, and stories of ancient druids who were also said to have burned their dead. But, ever the social activist, Price was very much aware of the growing movement in Great Britain for people to chose such ceremonies over traditional burials, even though such an option was illegal at the time.

There was a great deal of outrage and also some suspicion that the child could have been murdered, with Price then attempting to destroy any evidence linked to such a crime. Crowds gathered and the corpse was taken away before the flames could devour it. A sensational court case followed on where Price defended his choice and claimed ~


“It is not right that a carcass should be allowed to rot and decompose in this way. It results in a wastage of good land, pollution of the earth, water and air, and is a constant danger to living things.”

After being found not guilty, Price demanded his child’s body back, and while his young wife kept a mob at bay with pistols and Irish wolfhounds (that, the VV would have liked to see!) the cremation was finally performed, after which Price erected a 60 foot pole with a moon symbol set on the top of it as a token of remembrance. 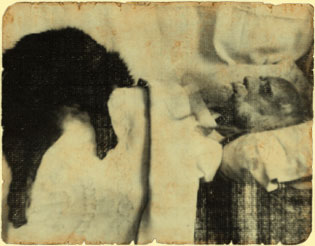 The event was a cause celebre, going on to influcence the law passed in 1902 to legalise cremation. Meanwhile, Price fathered two more children, another son and then a daughter, until, at the age of 92, he stood at his doorway one day and announced, “I will lay on on my couch and I shall not rise again.” When his wife tried to give him some cider to drink he demanded to have champagne instead, and while he sipped away at that Dr William Price gently passed away.

Following her husband’s death, on January 31 1893, Gwenllian ordered 9 tonnes of coal to be delivered to the summit of East Caerlan. There a great iron grid was erected in which to hold the coffin. 20,000 tickets were sold to those who wished to attend the cremation, with many spectators coming along dressed in full Welsh costume. There was a carnival atmosphere. 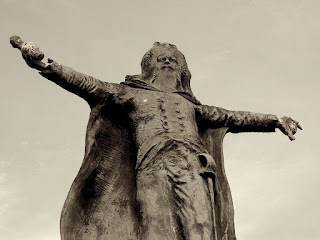 Price’s daughter, Penelopen Elizabeth grew up to devote herself to promoting the Cremation Society of Great Britain. In 1947 she unveiled a plaque in memory of her father in the Welsh town of Llantrisant. A statue was installed and unveiled in the early 1980's.

Dylan Thomas’ short story, The Baby Burning, is said to be based on the true events reported in this article.

The film in this link  (and also shown embedded in the post below) was created by Matt Brodie as part of his senior thesis at Emerson College.

Also with thanks to www.llantrisant.net