THE CASE OF THE COTTINGLEY FAIRES... 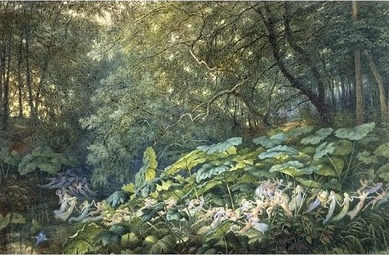 Under the Dock Leaves - An Autumnal Evening's Dream by Richard Doyle. 1878.
This painting is held in the British Museum

Having read The Unseen, Katherine Webb's second novel, there was one scene so vivid and magical that the VV was instantly put in mind of this picture by Richard Doyle - in which fluttering white fairies might well be moths as they hover beneath the dock leaves.


With this painting's creator also having been the uncle of Arthur Conan Doyle, it seems fitting that Katherine has written this guest post in which she discusses a famous event that intrigued the creator of Sherlock Holmes who - surprisingly for some - was a firm believer in fairy folk...

THE CASE OF THE COTTINGLEY FAIRIES
By Katherine Webb 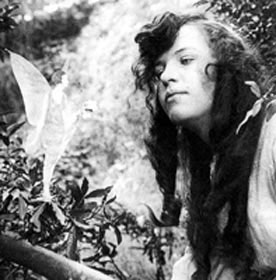 In 1917, Elsie Wright (above) and Frances Griffiths, two schoolgirls living in Cottingley, West Yorkshire, took a series of photographs of what they claimed were fairies. These famous pictures have always fascinated me – when I was younger because I liked to think that the fairies were real, and as I grew up because the hoax (or alleged hoax!) had lasted as long as it did, and managed to convince several prominent and well-respected figures of the age, including leading theosophist Edward Gardner and, most famously of all, the author of the Sherlock Holmes mysteries, Sir Arthur Conan Doyle.

So why were these rational, intelligent men so prepared to accept that the pictures were genuine? To sceptical, modern eyes, the photos look very staged indeed. Rather than appearing to be wild, elemental creatures, the fairies have neat, fashionable hair styles and slip dresses; they appear two dimensional, perfect, and doll-like. Photography experts at the time confirmed that the pictures had not been taken as double exposures, and that nothing had been painted or printed onto the negatives after exposure. One even testified that the fairies in the dancing picture (below) seemed to have moved during the exposure – proof positive that they were real, and had been dancing when photographed. Or perhaps, that a light and flimsy paper figure had shifted slightly in a breeze… 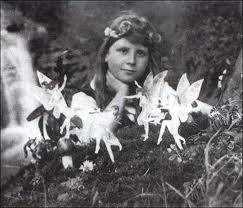 The answer to why the photos convinced these men becomes evident when you read the letters that passed between Edward Gardner and Conan Doyle, the articles about the case which Conan Doyle wrote for Strand Magazine, and his later book ‘The Coming of the Fairies’. They believed because they so desperately wanted to believe. For Gardner and Conan Doyle, fairies were part of a hierarchy of nature spirits and ethereal beings, in turn a part of the ‘universal soul’ that lies at the centre of theosophy. Only the truly enlightened, or the naturally clairvoyant, would be able to see these pure beings. As such, their existence proved the tenants of theosophy, or the ‘Divine Truth’, to be true.

But sightings of fairies didn’t always fit the theosophical model so neatly, and in ‘The Coming of the Fairies’, Conan Doyle clearly wrestles with the details of some reported cases. One Mrs Hardy, living in New Zealand, described seeing fairies riding around her garden on little fairy horses. This was not the only account of fairy horses that Conan Doyle had come across, but he admitted that such descriptions made things “more complicated and harder to understand.” If they had miniature horses, then, as Conan Doyle writes, “why not dogs?” At this point, the fairies stopped being the essence of nature made visible in bodies less dense than air, and became the ‘little people’ of childhood stories. So perhaps what made the Cottingley fairies so attractive, from a theosophical stand point, was that they had been seen by virginal young girls, often thought to possess a natural clairvoyance; that they were seen in an area of unspoilt natural beauty; and that they showed no complicated behaviour or equipment that interfered with the idea that they were indeed manifestations of pure natural energy.

The number of ghost and fairy sightings, and the popularity of theosophy and spiritualism from the late Victorian era right the way through the Edwardian, shows that people at the time were very keen to believe in an ‘other world’ of some kind – either the world of the spirits of the dead, with which a medium could communicate; or on a grander scale, in a whole pantheon of spirits of various types and powers. Perhaps, as some writers believe, these beliefs came to fill a void that was left behind at a time when new discoveries were encroaching on religious faith. Darwin’s theory of evolution was gaining ground, and undermining the traditional Christian explanation of the origins of mankind. Science, medicine and rationalism had left some people with serious doubts about the church’s teachings, and yet the world was still full of wonders – from electricity to anaesthesia – that remained beyond most people’s understanding. Spiritualism stepped into this gap. In short, people still wanted to believe in something – in some supernatural driving force; and if that was no longer God, then they would look for alternatives. 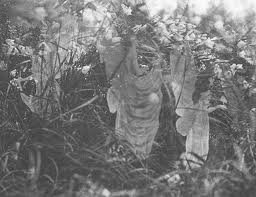 It was this desire to believe that was my starting point as I began to shape the plot of my novel, The Unseen. I started to wonder why different people might believe, and what their various reactions to the possibility of fairies living at the bottom of the garden might be; and also why somebody might be prepared to assemble a hoax to help convince the sceptics. Elsie Wright and Frances Griffiths admitted in later life that their photos had been hoaxed, taken with the help of paper cut outs. The high-profile attention they received made it impossible for them to confess at the time.  But to her dying day Frances insisted that there had been fairies at Cottingley, and that the final picture they took, of the fairy bower (above), was genuine. Using a fake to prove that something is real…a fascinating idea that I carried into my book!

Katherine Webb was born in 1977 and grew up in Hampshire. She read History at Durham University, since when she has spent time in London and Venice. She has worked as a waitress, and an au pair, a personal assistant, a book binder, a library assistant, a seller of fairy costumes, and also a housekeeper. Katherine now writes full time.