A BRIEF HISTORY OF DOLLS HOUSES... 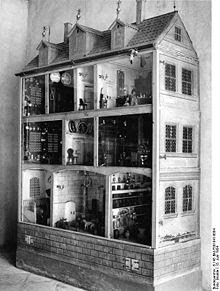 Of late the VV has been thinking about the history of dolls houses – partly because there is the brief mention of one in the novel she is currently writing, and also because of certain books and films she has recently read or watched.

In The Devil Walks is a YA novel by the acclaimed author Anne Fine. It has a gothic Victorian plot that centres around a dolls house which happens to be the exact copy of the home of the novel's family, and the miniature people within that house soon prove to be more than inanimate toys but hold the clues to a dark event that happened in their history.

There is a somewhat similar theme to the Jessie Burton's The Miniaturist, and also in the plot of a film called The Awakening: a very eerie story indeed, and one that the VV recommends - and here is a clip from that film in which an ominous doll's house is discovered by a character played by the actor, Rebecca Hall...

But, what of the origins of doll's houses? Where does the interest come from - for our children to love to play with them, for so many adults to love to collect exquisite miniatures like this?

Well, it seems to have begun as far back as the mid sixteenth century when Albert V,  Duke of Bavaria, commissioned a copy of his own home to be crafted and then displayed as a show of his wealth and eminence. In later centuries more and more scaled down copies of real homes were exhibited as display cases to be filled with objects of aspiration, with many of the finest examples costing as much to create as a full-sized residence.

Only in the Victorian era were the houses used as playthings – albeit being limited to those children whose families were rich enough to afford to pay the craftsmen who possessed the necessary skills to craft such delicate objects.

However, the industrial revolution resulted in mass production which affected many aspects of life - and as far as doll's houses were concerned it rendered them more affordable, very soon becoming a mainstay of any respectable nursery.

The German manufacturers – whose houses and furniture were the most prized – were Hacker, Moritz Gottschalk, Elastolin, and Moritz Reichel.  In America there was the Bliss Manufacturing Company. In England there was Silber and Fleming, Evans and Cartwright, and Lines Brothers – who later became known as Tri-ang.

Should you wish to see some fine historical examples today, the VV recommends a visit to the V&A's Museum of Childhood, situated in London’s Bethnal Green. There, the following examples of doll's houses are displayed - 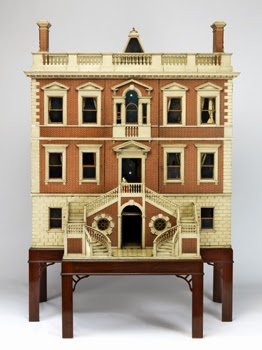 The Tate House was created around 1760. Modelled on an eighteenth century Dorset house, it can be separated into different sections - originally so that the mistress of the house could more easily take the 'baby house' along on her travels. The furniture is not contemporary. It is thought to be have been updated in 1830. Even the windows have been ‘modernised’ to appear as Victorian sashes when before they would have had twelve panes. 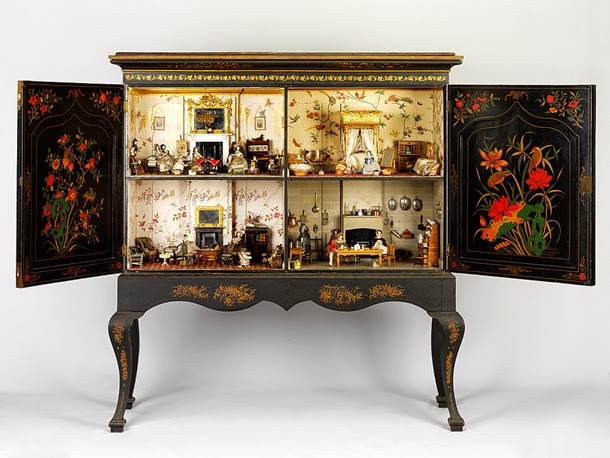 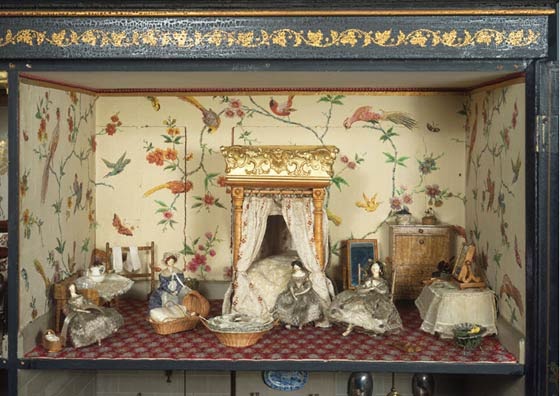 The Killer Cabinet House was commissioned by the Manchester doctor, John Egerton Killer around 1835. (The VV is trying not to smile at that unfortunate professional name.) The cabinet was made to indulge his wife and daughters in their hobby of making miniature domestic objects. It has four rooms – a drawing room, a morning room, a bedroom and a kitchen. 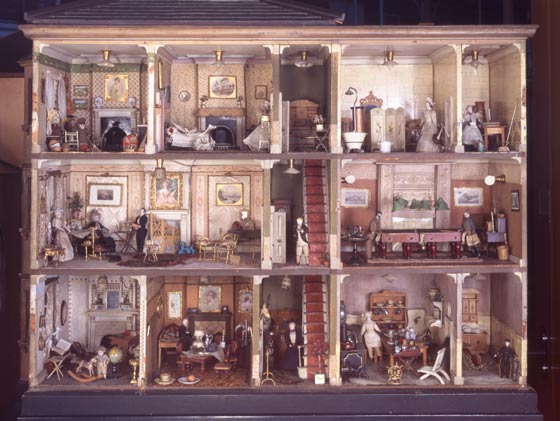 The Amy Miles House – circa 1890 – was made for the little girl of that name. It includes a billiard room and school room and, before it was damaged in the second world war, there was also an artist’s studio situated above a bathroom.


If you have any interest in antique toys and the history of 'childhood' more generally, the Bethnal Green Museum is well worth a visit, and this page from their website will give you much more information when it comes to their collection.


Addendum: When I first wrote this post I received a copy of Voices from the Doll's House by Adele Geras, a beautiful collection of poems from which I would now like to add the following few poignant lines -

My baby lies in the nursery
next to the attic reserved for mad aunties.
She has a hollow head
but I say nothing.
Hollow isn’t empty
and at night the space behind her eyes
thickens with little fluttering fears
that beat like moths: grey wings
against her eyelids.


For a related post on dolls houses please see: A BOOK FOR THE CHILD IN US ALL
Posted by Essie Fox at Friday, November 18, 2011

Email ThisBlogThis!Share to TwitterShare to FacebookShare to Pinterest
Labels: ANNE FINE, DOLLS HOUSES, MUSEUM OF CHILDHOOD, THE DEVIL WALKS, V AND A., VICTORIAN